Gorillas Have Funerals Too 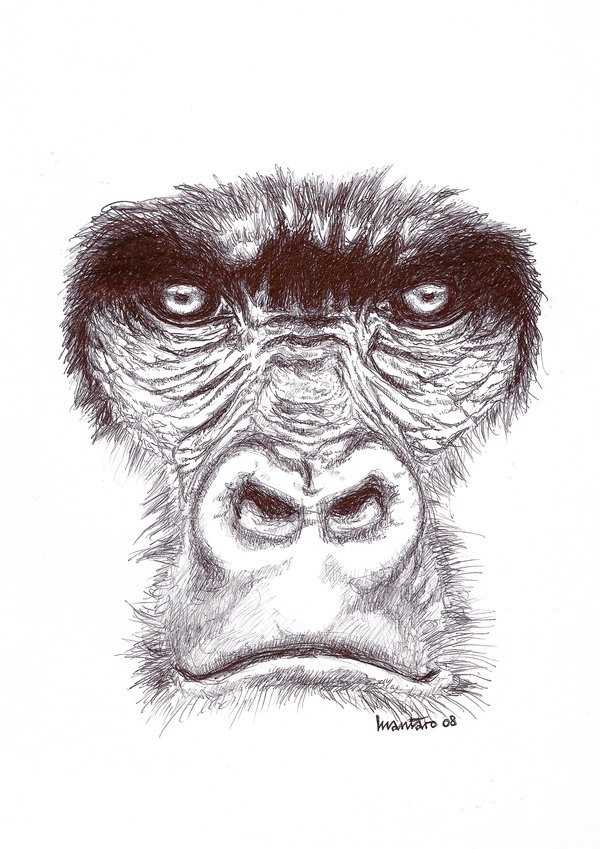 I was in the surgery's waiting room no later than last week when I picked randomly one of those overtired to be read magazines. I thought about it as a good move that would allow me to kill time and avoid staring at the other patients.

One of the articles that grabbed my attention was surprising to say the least. It claimed that according to scientists, animals but Gorillas in particular grieve their dead and have funerals for them just like humans. Now don't try to picture a Gorilla in a black suit walking behind a hearse but a team of researchers observed groups of gorillas and found that they would gather around the bodies of the dead and groom them.

The experts also expressed their concerns about Gorillas that prodding and licking of corpses may spread diseases like Ebola. Humans were once considered to be the only living species caring for the dead and having a concept of death but obviously we are not that unique. For some reasons I got prompted to check the date of printing on the cover of the magazine and it read April 2015.

An interesting year 2015 don't you think? In my opinion it is one of those pivotal years. A bit like 1960 who saw Sprite introduced by Coca Cola, The Greensboro Four, Elvis Presley getting back from Germany or President Dwight Eisenhower signing the Civil Rights Act of 1960 into law.  2015 on the other hand saw the unlikely collaboration between Rihanna, Kanye West and Paul McCartney (especially the latter) resulting into the launch of the music video ''Four Five Seconds''  on YouTube sometimes in February of that year.

2015 also saw the Charlie Hebdo bloodshed taking place in France while a refugee crisis was roiling over Europe, ISIS did strike on 3 continents , Greece was on the verge of total collapse and the Black Lives Matters movement emerged. A massive earthquake claimed 8000 lives in Nepal and if that was not enough to upset an already deeply troubled year Donald Trump announced his intent to run for the presidential elections of 2016.

But arguably 2015 was the best year we ever had. Well 2015a that is because that was the year picked out of three scenarios by the grand masters of destiny. They do this every year. They apparently want to test our resilience and see how we react to unforeseen situations. They have been doing this for more than 3000 years I am told. Who are they? Frankly I don't know but they appear to be of a superior intelligence and they have been studying us for a long time well at least by our own standards.

The rumour has that 2015b would have been far worse. Evidently not great to think that ISIS would have grown to the point that they would have won most of the democratic elections in the Middle East in turn legitimizing their thirst for dictatorship. That Hillary Clinton would have been murdered by a Christian crusader, the surprise killing resulting in triggering the largest civil unrest ever seen in the streets of the US. The rain makers of our lives also excluded an atomic accident in Japan scenario and most disturbingly it is to be said that we managed a near escape as they considered replacing Rihanna by Dolly Parton on  ''Four Five Seconds'' .

If you don't believe me that's fine. Its up to you. After all Gorillas have funerals too.

People & stuff and the grand masters of destiny

Now I know why I love reading your articles Pascal Derrien PAl I've missed them. I learnt alot about gorillas after watching King Kong and after Ellen De Generes started that wildlife fund for them. But I never thought that they would actually have funerals. Well it has been proved time and again that animals have more heart and love and grieve more than humans. I watched the movie Hachiko - A dogs story which made me cry thinking if we could ever love someone the way an animal does. Thank you for the fantastic read

This article evoked in me a very sweet memory of a story I saw just recently about a dying female Gorilla in captivity...She was very depressed and in terrible pain as she lay dying. She was not responding to anyone caring for her until a former trainer of hers (which she had formed a very close loving bond with) had been brought in to comfort her. The moment she heard his gentle voice she lifted her head to face him...The joy that came over her was immeasurable, however VERY VISIBLE as she broke out in the biggest of smiles;-) His presence broke through her pain. She reached for him and held his head to her chest...She died peacefully... Just telling that story brings tears to my eyes. Thank you Gerald Hecht;-)

#25
thanks Gerald Hecht article it is excellent ☝️

Pascal Derrien I'm in Botswana heading for the Okavango Swamps to check on the progress of the elephants last seen in 2015 ...stay tuned

On 2015 I first realized the unlogical fact that pizzas are round, they come in square boxes, but we eat them in triangles. Therefore, I moved to Germany, and since then, my life hasn't done anything but getting better by the day. The language, the culture, the way of living, the weather are strangers to me. But I feel like home. Pizza Logic. Do Germans grieve as gorillas do? Not too sure. Time will tell. A fine piece of work, Pascal, thank you for sharing.

#20
that's right uneventful is not a yearly human feature unfortunately 🤔 many thanks as always Franci\ud83d\udc1dEugenia Hoffman, beBee Brand Ambassador

Ouch! 2015 so full of violence and don't you wonder about those that state such and such a year is the best we ever had!? Fascinating stuff Pascal Derrien.

What a fantastic piece Pascal Derrien! Of course, I wouldn't put it on LI....you'll have Homeland Security (zero sense of humour) watching you. They don't have much else to do :) Have you noticed that Silverback has Gary Oldman's mouth? Some other 2015ers (nicked off the web): https://popculturemadness.com/PCM/2015/2015-fun-facts-history-trivia/ Scientists discovered that Boa Constrictors kill their prey by cutting off their blood supply, not by suffocation like it was originally assumed. In 2015, more people died trying to take selfies (12) than from shark attacks (8). The population of London in 2015 exceeded its 1939 population by only one person. NASA confirmed, through an epic space-time experiment, that predictions of Albert Einstein's theory of gravity are correct: there is a space-time vortex around Earth. Go figure.

#9
Ken Boddie timely reminder as I had forgotten that one 😉

Since we're reminiscing, Pascal, it so happens that Ringo Starr was inducted into the Rock & Roll Hall of Fame in April 2015 ... no doubt "with peace and love" 🤗

Great read Pascal Derrien! Elephants also have funerals and go back and visit the remains of their fallen friend for years and years afterwards, gently caressing the bones with their trunks.

it is always interesting to take notice that animals having no horns are always fierce than the animals having horns. lovely insight Pascal Derrien! enjoyed read and shared. thank you for the buzz.

#1
yes most probably otherwise it maybe Dolly Parton and that's not super reassuring as a thought :-)

Are you hinting that you stand with the theory that that humans originated from gorillas?