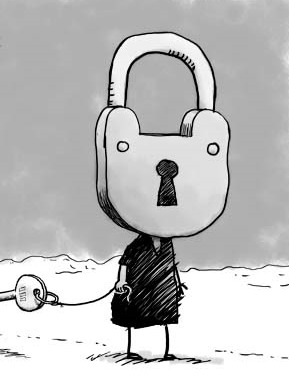 Are we not all facing that dilemma at some point or another? What does it take to open the locker?

Some say it takes courage, maybe that’s what it’s called when people don’t have the guts to turn the page

Some say it’s indecent to unfold a skeleton and his crescent, it should be kept in a cupboard that’s what I heard

Hmm that’s all I must say to those who crawl away, would it not be better to plant a new mint and smell your print

I don’t do that, that’s what you say, what if the soil is in decay, is it for that reason that you look at me in dismay

Breaking news, it’s not that easy to get past the abuse

#27
Either way, Pascal, the result is perspiration.

#28
Have no fear Joyce. I know a great locksmith!

Ken Boddie I think we've thrown it away.

#26
huge thanks Ken Boddie some great questions about preservation or is it perpetration...

As one door closes another ..... slams shut in our face! But ..... Do locked doors keep our feelings and emotions securely shut up inside, or prevent them from being shared? Do locks prevent invasion or avoid others helping? Have we temporarily lost the key, or thrown it away?

#18
Helena Jansen van Vuuren the gift of lucidity is not always a welcome gift at a denial party, sometime its not the right time , btw many thnaks for kind words too :-)

#19
thanks Devesh Bhatt so many questions so few answers......

#21
Lisa \ud83d\udc1d Gallagher thanks for sharing such a personal story I have beene using that sentence quite alot this week but it seems appropriate, people do what they can not always what they want

Pascal Derrien, I'm glad you are writing about it. I think (well I'm learning) to face our demons, fears etc... are part of the healing process. You have a way of writing where you don't sound like the victim (even though that would not matter to me) because you WERE a victim and I feel your pain in your writing. My husband will kill me for saying this but he was abused severely growing up and no, you don't get past it. I think his way of dealing with it was to try and block it. He's a type A, a workaholic and over the past 3-4 years he has finally been able to show more emotion around me and share feelings.. he will never be able to share like some men do. My mothers illness and death changed him over time. He told me she was the only mom he ever had. He said she took him under her wing when he was just a teenager and always treated him like a son. His mom is still alive but they aren't close. I know he loves her but not in the same way many men would love their moms. Thanks for sharing this and I'm sorry I went on about my husband.

This is what they mean by authentic. I hope you inspire many others to open up.

why did i dress my emotions in the first place? what locker? what is opening up?

Sjoe - how do you do that - stop me dead in my tracks!! I have lived on autopilot deliberately and intentionally to avoid confronting things and the self. It is easy to do. Or is it easier to do? I did stick my head out once and the backlash made me lock that box and here you are 20 odd years later. Do I want to think or do i just keep the box locked or maybe for me my stuff belongs in the box. Lurve your way with words!

#16
thanks Gert Scholtz I was thinking less is more but I was surprised myself how short it was .... :-)

#13
oh thanks Joyce Bowen good to hear , as ana side I am more at ease with my broken prose but have made some incursions on urban poetry now it is what it is :-)

CityVP \ud83d\udc1d Manjit I do love this. It speaks to me. Thanks for a nice read.

#3
ah thank you Sara Jacobovici it is just a question of opening the gate once you find the key :-)

#5
thanks Tausif Mundrawala every now and again you have to face the obstacles frontally no need for a detour :-)

#6
many thanks for your consitent praise debasish majumder they are much appreciated :-)

First for choice of picture, for me that would be a good drawing to describe LinkedIn's long-term service offering. For the buzz - I learn a lot from the darkness as much as I do from the light - I choose this diversity and I say kudos to this. I would like to invite Joyce Bowen to contribute here, she is recently arrived bee who both writes in the human voice, who is a creative storyteller and can reach into the depth of the human condition, as deeper felt experience.

I don't want to be trapped in your paradise. This is such a powerful piece of writing. It reminds of the grey clouded sky before the rain. The stormy clouds are a symbol of as much as we can hold those emotions but when it breaks loose ! Clearer skies ! Abuse is a wound that left a scar after the pain ! Thank you Pascal Derrien !

One layer, one door, one emotion, one.......at a time, your time. As your image reflects, the irony of it all is that you hold the key. Looks like you have the guts to turn the page Pascal Derrien. Powerfully written. Thanks for sharing.

#1
@mohammed sultan many thanks for being the first to comment :-) as long as there are people like you there is hope....