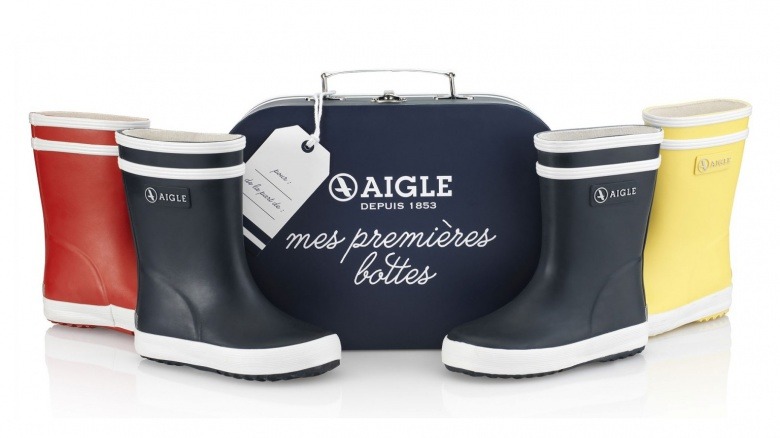 I was in such admiration of my new wellington boots, never in my wildest dreams I thought I would own a pair of Aigle. I was 10 and half on this wet March 1979 when my auntie took me shopping to what was to me a high end shop and 90 francs was abnormally expensive even for a prestigious brand when my best runners bought in a local supermarket were probably about 10 francs.

I should not have been here in Normandy near Deauville at that time of the year, in theory I should have been at school where I lived and that was Britany. I did not know either that I was about to break free from school or any supervised constraints for 10 to 12 weeks.

I had never been at my grandfather’s stud at that time of the year and the mansion like house with its numerous bedrooms looked like a massive castle more than ever. It was also unusual for me to get so much attention from my uncles and aunties who took turn to take me to fishing trips, fun fairs, bought me almost whatever I wanted including the purchase of a complete new wardrobe with a few toys thrown in to make good figure.

It’s raining hard in Brittany that night, it’s probably 3 o clock in the morning. Hotel Dulange ‘’2 stars with petit dejeuner inclus’’ this is a small part of what my mind registered when we left the taxi, I remember I had never been in a taxi before. The driver gave the change to my mum and we went to the reception area once the door got opened by the night manager on duty. We got a room with one bed and I felt asleep in my clothes almost immediately, we had no light bags or luggage’s.

A few hours earlier I had been in my own bedroom, my door was closed. Adults were shouting, screaming and crying, I heard some porcelain falling and crashing on the floor, doors were slammed and insults were exchanged. I tried to make myself small and put two cushions on my ears so much I wanted the noise to stop, I could not take any more of this tension, I wanted the noise to go away I just wanted to sleep and make this nightmare that was ours disapear.

Then the door opened suddenly and it’s my father!! At first I did not understand what he was saying, he was shouting get out! get out!! get the f..ck out of here!!! his eyes seemed to have blood in them probably the result of more than a few empty beers spotted in a sink. I am in PJ’s I said… he stopped as if he was realizing how ackward all this was, but then he threw my jeans, my sweat shirt and a jacket in my direction almost like if he was doing me a favour.

My mum was already in the stairwell, I could see she had been crying and I am almost sure Mme Duchene was awake too and observing the scene thru the eye locker. Maybe she was not the only one but nobody intervened, this is intriguing at best providing there had been so much noise. Most of the neighbours had always been nice to me in a way that seemed to acknowledge that life should be made easier for little boys.

We are 11 weeks in Normandy now, I have enjoyed my pair of Wellington so much that I have been cleaning them almost every evening before reading my Buffalo Bill adventures book, I have done a lot of things I would normally don’t, my grandmother cooked me all my favourite meals and my grand-father took me with him most days on the jeep to feed the horses at remote stables.

My mother called me in and took me to her room, she asked me how was my day and then handed me a letter before asking me to read it. It’s from your father. At first I refused to take it, this was a reflex I guess as I did not want any of this toxicity been thrown at me again. She asked me again, I took it reluctantly and I read it.

I did not understand everything but there were words of love, sorrow, remorse and gratefulness. It was not strictly speaking addressed to me but there some mention of forgiveness and giving it another try.

I gave the letter back to my mum, I think my eyes were wet when she asked me to make and take a decision, she would do whatever I would say we should do…… I did not process the information really fast but did my best to visualize not only my future but what the future of two adults could be.

Our future was in my hands and for whatever reasons I realized I still had my wellington boots on, at that thought I seemed to ask myself would my grandmother kill me if she knew I was in one of her pristine rooms without my sleepers on.

WE SHOULD GO BACK

#23
thank you Praveen Raj Gullepalli I have not bought a pair of wellies in a long time but always have a lot of respect for them :-)

#20
ah thank you Ken Boddie are you sure we are talking about the same guy :-)

#20
Thanks for the earworm Ken Boddie... aarrrggghhh!

Another Pascal masterpiece! This tale of past haunting memories initially soothes and caresses like a grandmother's kiss, then SMACK, you strike the emotions like a fly fisherman's well timed cast, and draw tears from the reader, who is 'hooked on a feeling'.

#15
ah thanks Dean Owen, I am not the real mc coy but doing my best to only be my best :-) I don't really benchmark myself with others some had easier lives and that's great but I don't envy them so had far more difficult paths and I don't envy them either. It came back to me recently when I went to buy a pair of wellies for my daughter recently pink with some white spots if you want to know ......

#16
it is easy to write the decision to write it was a bit more difficult, I feel bad now don't like making ladies cry :-( thanks for the kind words Aurorasa Sima :-)

Thank you for sharing this. I had bookmarked it when you published it but had no time to read this week. Glad I did. How often do we recall chaos through something tangible, something real, in this case a pair of Wellies that kept you grounded. Loved the storytelling. These events makes us what we are, and in your case it is obviously a good thing!

#11
thanks Lisa Gallagher that was a decision making workshop alright :-) in a way my time there was timeless almost a cocoon in the middle of a hurricane but I knew it could not last one way or the other :-)

#7
Thanks Vincent Andrew the main reason I have shared some of the personal stories is really about stressing out the collateral damage of addiction alcohol in this case but I suppose drugs may even be heavier in terms of impact . Thanks for the kind words :-)

#9
thanks Franci Eugenia Hoffman what an harrowing choice , thanks for sharing this

Wow Pascal Derrien, that had to be a hard decision? Or did the emotions of your dad seem real to you and you truly wanted to go back? I bet you felt just like the little boy you should have for that time you spent with your Aunts and Grandparents. Actually, you probably felt like royalty. Agree, no child should have to see or experience what you did. Too many do and it makes me so sad. I thought you were going to leave us with a cliff hanger ;-) Glad you didn't.

Powerful story Pascal Derrien. Life is so different in so many ways when we were in our childhood. There were times when I was a child and I had to make a decisions, one of which involved my health. I was 12 or so and had strep throat. My parents were practicing Christian Scientists and did not want to call a doctor. I pitched such a fit, they broke down and called a doctor. Good thing because I was on the verge of pneumonia. After that they still practiced their religion, however, they also practiced common sense. Sometimes a child's decision is pure and simple and not complicated by suggestions of others.

#4
Maybe adults who still possess some qualities of the child - sense of wonder for example - should rule!

#5
some decisions are defining moments I suppose. I was not taken aback by the enormity of the ask but probably more aware that I had to get it right for others than just me i changed my mind at least 5 times in a space of 2 mns...... in the end I made the right choice I believe ☺ thanks so much for dropping by and finding the right words Mark

You are tapping into some powerful vulnerabilities here Pascal Derrien Thanks so much for sharing your stories.