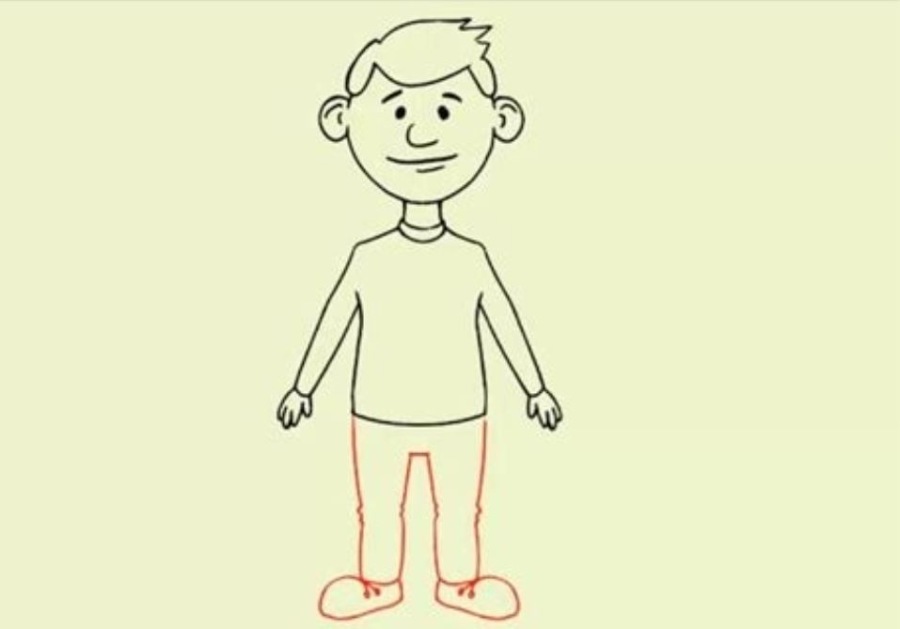 The guy. I don’t know his name. While the man does not have a striking magnetism, his face is very familiar to me. His charisma is probably on the lower end of the spectrum. I guess he is just a bloke working in the local shopping center, I think my American  friends call it a mall. I am not even sure what is the dude's official function in there. Part time handyman, bin man and over all maintenance maybe. It does not really matter in the end.

The shopping center is like any suburban mercantile establishment. It consists of a handful of carefully landscaped complex of shops. They represent a few leading merchandisers and include a few hipster food take away outlets. Add one or two coffee shops namely a franchised Starbucks and you obtain a fair selection of buying goods and services options. The choices are broaden by two larger retail stores Dunnes (clothing)  and Supervalu (Grocery) who drive most of the foot print insofar as they are leading the way for the smaller outlets to harvest the dividends of the commercial traffic. Not a place where you would spend your week end though, there is no movie house or anything like that. It's more like a larger version of a convenient hub rather than a flagship retail complex.

Anyway I was sitting in one of the two cafes sipping up my coffee. It was around 13.30 on a Tuesday or may be it was a Wednesday? I don't really remember which day it was not that it does matter. It was the tail of the rush time and most of the seats and tables had been vacated. Most of the dining cutlery, sandwiches plates and other bowls were littering the unoccupied tables.

The guy got in and casted an eye on the place. He was most probably about to order a cuppa when he requested one of the staff behind the counter to hand him a tray. She did as asked and methodically off he went to each and every table and loaded the tray with all the empties. He brought them back to the kitchen, put the rubbish in the bin , and set the cups and dishes in the sink. I could see the gratitude and sense of relief from the overstretched  café personnel. He graciously accepted a thank you and a free coffee to go and then left as discreetly as he had come in.

With hindsight it was not the first time I had seen him in action. A mental impression retained and recalled from the past provided a few memory flash backs. One being the time he attended the car of an old lady with a jumpstart device, another time he went to a nearby shop and asked if he could get one of the promo balloons on display before delicately delivering it to a grateful toddler.

I have never seen him asking for anything, his demeanour does not suggest a craving for recognition or validation. He is just doing it, that's the way he is. He brings a smile to people without justification, agenda or ulterior motive.

I guess we all could.  Maybe some of us did, if you have kept on doing it kudos to you. For the others maybe we have let life convinced us that living is as complex as playing guitar with five pair of hands.

Why can most of us not be more like the guy?

Pascal Derrien - I think there are glimmers of hope for all of us, not just by The Guy . Children like Austin Perine - https://www.youtube.com/watch?v=B7Pc0fw9w1Y give us hope. (#showlove)

#36
I would say thanks to the Guy Ian Weinberg He is the silent hero of the story .Many thanks for dropping by :-).

Pascal Derrien Value contribution is making something better than it was before we engaged with it. But value contribution has to be triggered by awareness of, and sensitivity to, the environment beyond self-interest. I guess we have to relie for the most part on the existing value contributors to inspire and prompt us from time to time, to transcend our self-interest fixated modes to become a little more conscious, aware and sensitive. Thanks for inspiring.

#20
Lisa is spot on, as I have always lived my life is to be kind and help more to support women in all forms of business.

All I have to do is slide away the remaining ego within me, loosen the inner critic, deflate moments of defensiveness and the demons of self-talk and then I am nearly "that guy". Why can't we be that guy? Because we can't 😊 I am BTW getting closer to this agape being but won't ever get there, especially when there is still pleasure in the dark side and our own conscious speaking to us with our inner "you naughty, naughty little boy!". 😊 This however does not mean that we should not hope to bring this light of being closer to the real thing - the closer we get to the light, the wiser we become rather than merely appear to be.

#30
thanks Gerald Hecht Noah's arc thats a great analogy and the perfect storm is ahead of us....

#28
In agreement Harvey Lloyd. Economical in intent , our observation skills and ability to recognize the good in many things surrounding us has shrank, we need to re kindle our mindset with real values rather than screen driven exposure .

Great thoughts and insights of humanity. I would venture to guess that like our waist size directly correlates to our diet, our heart/brain is subject to dietary concerns. Our ears and eyes tend to take in a steady stream of the brokenness of society presented from many venues. Given this diet i think we instinctively look for proof the diet is right. The blindness to others is caused by our focus on proof of inputs. Stepping back and seeing the real humans that each day attempt to grow a little and how i might help, rages against the social construct of the 10%. They have the microphone. The uplifted hearts of those in the coffee shop was worth more than a paycheck as the gentlemen executed awareness of humans and not searching for proof. Great reminder that people attempting to grow are all around us, we need only to intentionally look.

#26
Wipro really ? A big company I had not realized the head was one of those guys anyway good to see Praveen Raj Gullepalli 👍🤔

Very nice. Actually, a lot of us do, but in ways so small as to seem almost insignificant. The world, as it is presented to us In 2-D, is generally a distillation of all the shitty stuff that happens. But in reality you can see people being very generous and humane every day. All you have to do is sit still for a minute and look for it. I've been making a concerted effort to move away from the crap and over into the nice part of the world. Which is why I read people like you, my friend. You remind us of the real world.

He is just doing it, that's the way he is. He brings a smile to people without justification, agenda or ulterior motive". I wish we had many more of guys like this one.

#16
Hey John there is some thruth in what you say its up there with moral compass and integrity thru actions :-)

#10
Perhaps what works most against the Good Guy is the warning "If it's too good to be true then ...... "  What in fact makes the difference is whether you choose to trust the good guy or not.

I suspect, Pascal, that very few of us aspire to being cynical, but rather cynicism is an all too readily available shield to protect our childlike innocence. Like a downwards spiraling whirlpool, it sucks us in to join its negative siblings while suspicion diverts us from the ‘nice’ guy. ‘Nice’ is so often accompanied by its spouse, ‘alterior motive’, that when it parties as a batchelor, we sometimes fail to embrace ’nice’ for what it is. Would that we were more capable of releasing our inner child and, as a society, embracing ‘nice’ unconditionally.

#13
hmm yeah I guess you are probably right but cynicism (in general ) is not a great attitude or a lasting value to aspire too maybe we should try to resurrect nice if it's available to us ? What do you think Ken Boddie 🤔

We killed ‘nice’ a long time ago, Pascal, or else we turned a ‘blind eye’ to avoid watching it dying under the contempt of others. Now, if ‘nice’ attempts to resurrect itself, we stifle it with suspicion, strangle it with solecism, or scrummage it with sarcasm. ‘Nice’ is dead, yet ..... long live ‘nice’!!!!!

#11
I agree Lada \ud83c\udfe1 Prkic there are probably more silent heroes than we think or even see thet are just overshadowed by the egocentric noise of many attention seekers who deep down don't really add anything to the equation of being a good human :-)

There are many like the guy from your story. Just because they do not talk about it and strutting around, they are practically invisible. For many, giving without the expectation of getting something in return is one of the hardest things to do.

#9
very fair observations John I read a book recently called the Choice by an auschwitz survivor ... you may like it 🤔

Since the majority of us have freedom of choice as to how we react to/ treat others. Then in answer to your closing question. Because they choose not to be like him. As long as we have phrases like cruel to be kind, learning the hard way, and kindness is Sen as a weakness and people subscribe to them then nice will not sell

We all have it in us. It's tough being kind. Kindness is not often returned when the giver needs giving. We need to alter our egos. Perhaps the time will come when kindness is never a surprise. Kudos, Pascal Derrien.

#5
Thanks Tausif Mundrawala how come I am not surprised you support and promote such values :-) ? You are good human being :-)

If there were more like "the guy", it would surely be a nicer world, wouldn't it!

#1
Debasish Majumder indeed we may not have the answer but that should not prevent us from asking :-) ?

Great buzz! a pertinent question truly haunt us all! enjoyed read and shared. thank you for the buzz Pascal Derrien.