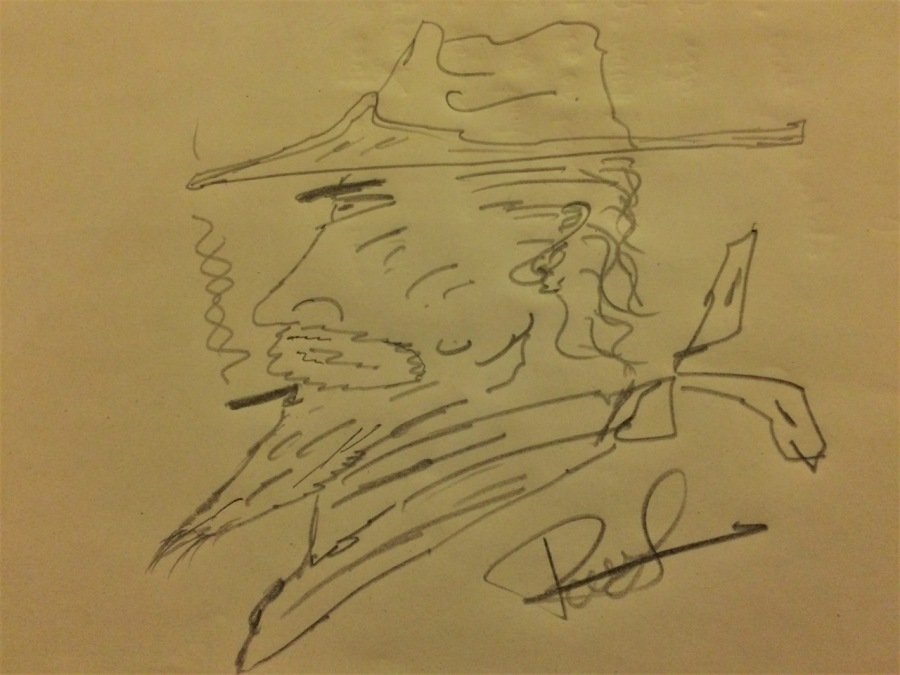 I have realized relatively early in life that I was not and would probably never be a genius, it occurred to me very quickly that I was not the brightest of the bunch and that my name would probably never be remembered or listed in the great book of History. I was not even disappointed perhaps because in all probability it had some practical advantages such as living incognito and/or not having to sign autographs on a daily basis and that's not a negligible advantage in life.
In contrast we seem to be living in an era full of noise inhabited by gurus and experts, generation loud I call them. They know everything about everything, they have written silly books and have tons of Twitter followers. They would with considerable certainty lecture you on how about you have made the wrong decisions to date and how you are more than likely heading towards a disaster if you don't religiously listen to them.
Some of those guys are held on pedestals and worshipped like heroes, they are fraudsters even though sometimes they have succumbed to the belief that their made up stories are real. Its time to turn the volume down and park the silly trombones and other tawdry ornaments from those who are racketing the silence of wisdom. If you have nothing to say it becomes just an acoustic activity, a disturbed communication pattern full of meaningless facts about the wholeheartedness of life.
The real and quiet heroes in my opinion can be found in oncology wards, courage can be seen among those who are fighting with Parkinson and other degenerative conditions on a daily basis, most conquerors don't publicize their meagre achievements, they have a quiet demeanour, show reserve and display the long lost ability of not trumpeting petty achievements, they deal with changes with humility and composure, They understand and know that decision making is a powerful tool but they also accept and respect the fact that the scope is sometimes narrow.
I am a very average guy you see, I am not even going to pretend I am a failed artist because the only thing I can draw is a bad portrait of a cowboy but that's alright with me. I understand my limits and my boundaries, I agree that some stuff can sometimes be pushed but I am also fully aware that some simply can't. Maybe I am a one trick pony but that's my choice or is it?
To those who sell magic wands and other possessed considerations, how about you tone down the charming incantations and come clean about the illusory world you live in.
If nothing else maybe just out of respect for those are struggling with real life hazards you know nothing about.

as always wonderful buzz Pascal Derrien! enjoyed read and shared. thank you for the buzz.

#34
thanks Lada \ud83c\udfe1 Prkic for bringing Albert in the discussion he knew one thing or two that chap :-)

I would say that geniality takes many forms. A glimmer of genius is in us all. :) There are many people who despite enormous IQ never accomplish anything monumental and weren't listed in the great book of History. On the contrary, many people with average intellect were renowned for their achievements. I like how Einstein described the difference between him and the average person. The average person would stop to look for a needle in the haystack when he or she found one needle, but Einstein would continue to look for all the possible needles in the haystack. So we just need to be curious and continue to look for all the needles.:)

#29
I'll bet you circumvented a few bloakes along the way Pascal Derrien;-) Good for you! Mama's...please let your babies grow up to be cowboys!

Pascal Derrien so so good my friend. In praise of the quiet hero.

#28
Interestingly Cyndi wilkins I gave a talk (not something I overly publicize :-)) two days ago using the base of this article I was speaker 11 or 12 and I can tell you the 10 previous guys (mostly guys) who had been bragging about their status did not feel at ease.....

Most of those 'worshipped like heroes' have never faced any real threat in their lives...such as on the battlefield defending their country or an oncology ward fighting for their own lives. You are one of the most authentic writers I have had the pleasure of connecting with here in the virtual world Pascal Derrien...and in my opinion, 'real' men are cowboys;-)

When the sun sets and darkness descends and you are about to close your eyes for the last time, you will have a feeling, it will be the feeling that sums up all of your life's experience. And if you lived life honestly and treated people fairly and really connected with respect, then it will be a good feeling as you pop off. But if you were judgemental and disparaging of others and if you were never good enough for you, you'll probably have a real bad taste in you mouth just as you check out for good. And so I humbly offer the advice that I received from my late mentor - live every moment of your life with an eye on the last feeling that you'll have when the lights go out forever and ensure that it's a good one. I've rambled on a little here, but such is your inspiration Pascal Derrien - the authentic voice of an authentic soul. 🙏

Pascal Derrien . well I for one love the cowboy!!! Great piece a always, thank you

Interesting stuff, Pascal Derrien, and actually, I quite like the cowboy. I've been looking at illustrators for my children's book "Life As A Bean." People have talent but no imagination. I tell them not to be literal, to find something people wouldn't expect. "Let your hand go," I say, but I get what I call "Dick and Jane" drawings. Your "cowboy" is much more interesting and far from ordinary. Remember, ordinary people want yo to believe you're ordinary. They want a club and a crowd. They want us all to appreciate sameness. They think then, there'll be no jealousy. People set themselves up as "experts," so they can confirm how successful sameness can be. But behind closed doors they watch Star Wars and play with their iPhones. They enjoy what no "same" person could create. It's the irony of society.

#19
I agree with Jim he put that one down very well and astutely Franci\ud83d\udc1dEugenia Hoffman, beBee Brand Ambassador 😀

Nothing wrong with being average as long as one is happy with who they are. Some that are in the limelight are unhappy souls and suffer while trying to constantly maintain their image. Like Jim Cody \ud83d\udc1d Brand Ambassador says we each bring to the table a special skill set.

Pascal Derrien Absolutely nothing average about the post and the message therein - coming from a real observer of what is important in life - thank you Pascal.

#14
thanks Jim Cody \ud83d\udc1d Brand Ambassador I am happy it does resonate and somewhat had not realized some us of us were (e)specially average :-)

#12
The episode of pavarotti is still a mockery on the part of my children. https://youtu.be/eQSNVBLTXYY It is clear that I did not approach him. But well thought, I'm closer than them, Pascal Derrien ;-)

#8
Thanks Laurent Boscherini every now and again it is important to reset :-)

#6
Indeed Lisa Vanderburg a bit of decency would be welcome some guys and gals are so self obsessed it becomes obscene at times :-)

Thank you Pascal Derrien for sharing your excellent post as usual. Totally agree with you, no need to be famous or somebody else, for what? Being Emphatic and respectful is a strength to go beyond our own fears and keep sane our own singularity.

An excellent reflection of what we sometimes lose touch with; reality and humility!

This is the real and the raw, stripped-down of pretence, ego and selfish need; love it Pascal Derrien - one that the loud crowd would learn from. Too many heads screaming 'me! me!' and not enough getting on with just doing.

There are two things that I have feared all my life. 1 That they caught me lying, that's why I can make a mistake, but not lie. 2 Ask me how did you do it? not for transmitting my secret, it is in case my "ignorant" method can hurt someone. Then I think when in a job I thought I was alone and I started to sing full-blown opera and a client came out of the bathroom and threw a "bravo Pavarotti" my second of glory and shame. By the way your drawing I like more than mine of the musketeer, perfect minus the fingers of the left hand I never managed to give him the naturalness. It is always a pleasure to read and listen to the music that accompanies it.

#3
thanks Ken Boddie I would gracefully do it but I can't write either :-)

Hey, Pascal. You may not be a genius in your book, but you’re a pretty astute observer of human behaviour in mine. Keep heaping crap on those self proclaimed illusionary experts, mate. And yeah ..... can I have your autograph?

#1
thanks Chris , especially this time of the year there is an epidemic of BS :-)