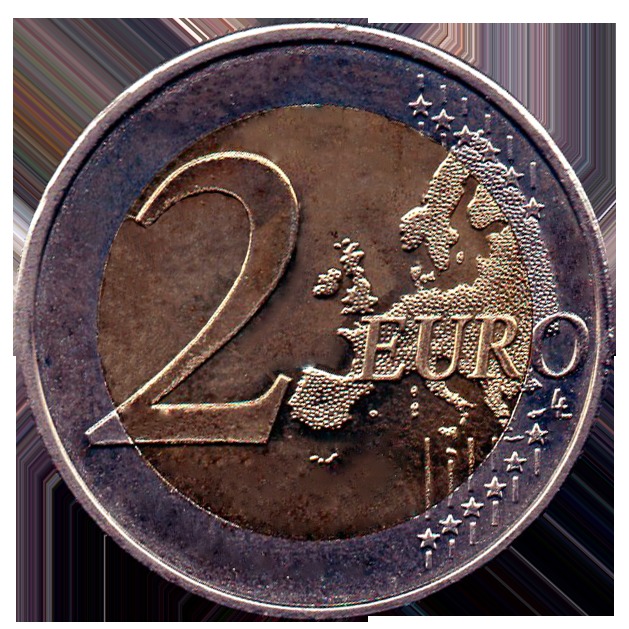 My name is Herbert and I am a 2 Euro coin. I was born in 2007 as part of the 2 series baby boom. I will have my tenth birthday sometime this year. I was originally born in Spain but my mum and dad are respectively from Ireland and France.

As it is the case for us change cubs, we get separated from our parents very quickly and I spent my first two years in Spain being handed over from shop to shop all around the country, it was exciting and new but sometimes I found it tiring to hop all the time from a purse to a wallet.

It was a varied and hectic lifestyle, one day I could delicately land on the soft palm of a hand while other days I would crash violently on a table, other days I would have to fight with sticky gums on a dark pocket but what I hated really the most was the inadvertent fall on the ground. Never one temporary owner interestingly enough has ever asked me if I was OK after such a fall.

After two years of sunny travels I don't how but I ended up on a plane direction Finland. I loved it there it was quieter and people were different, mysteriously I landed in a kids drawer, his name was Jack. I stayed at Jack's for a long time a year or two maybe.

I was not the only one and befriended other currencies living in the same jar like me but I had a particular bond with an old one euro, he knew a lot about the world and Europe in particular. He had been everywhere including all of the 19 countries composing the Euro zone. He even stayed at the Vatican for a week end once.

I loved one Euro, he was the grand father I have never had , he had great stories about currencies, coinage and other denomination. For example he knew the legend of the 500 Euro note. Like most he had never seen one but some of his close and reliable acquaintances have told him that they met some in a Dutch bank.

Obsessed by proving his theory he always asked the 10 and 20 euros notes who landed temporary on the drawer if they had encountered the famous e500. One day a mature and respected 50 euro note stayed with us for a few hours but he too had never seen one. For some reasons at the end of that day I was also picked up as part of loose change and left in a brusque fashion. I never had the opportunity to say good bye to grand dad one Euro and tell him how fond of him I was.

In the space of two weeks I went thru Germany, Italy, Belgium, Austria before landing in Cyprus. To be fair I had long lost that sense of roaming in my cosy Finish drawer and I was far from appreciating the sweaty hands and other malodorous recipients I ended up in.

Later on exhausted by my travels I found some comfort in resting at a point of sale register of an ice cream seller somewhere on a beach in Cyprus. I have to say I was bit disoriented I didn't have too much in common with the other guys I was staying with, all the other euros there were from around the town and not as well travelled as myself. But that got me thinking.

The fact that we speak a different language and sometimes cannot communicate with each other is not important to me, I think we should not base our value on what we have not done but what we will be doing together. How we devise is sometimes how we are responsible for the precipitation of our own demise.

#26
That's what makes you special and awesome :)

#23
ah Harvey Lloyd you are very good and I am pretty humbled by your comments :-) I am still a kid at heart :-)

Words of wisdom "I think we should not base our value on what we have not done but what we will be doing together. How we devise is sometimes how we are responsible for the precipitation of our own demise." Pascal I love reading your stories. How you get us into the story is quite remarkable and it remains as a memory like watching a good movie.

Pascal Derrien i believe you may have been holding out on us, here. I detect a great wisdom in your story of the coin. This was a great story line and the depth of the metaphor was not lost on me. I see a great short story on this literary wisdom.

#19
thanks Barbara Herbert is full of surprises isn't he 😀😋

A day in the life of a coin. Thank you for this view.

#13
as Herbert would say it is about finish lines not finish times he is a bit round alright but that's all his charm I suppose many thanks for reading and nice words about creativity :-) Lisa \ud83d\udc1d Gallagher

Wait, you ended the piece with two cents so that is a Harvey not a Herbert.

I grew fond of Herbert the coin! How creative and thanks for the history about the coins travels. Enjoyed the video too, such beauty! So I read below that Herbert is fat, well have Herbert run with you ;-)

#11
yeah it is true there was lot of distress and discontent when introduced but Herbie has trimmed down his belly since he is far more athletic now :-) @Julio Angel \ud83d\udc1dLopez Lopez

The euro came into my life in an apotheosis. They gave me a 1 of 20 to the 5 minutes of that year of its premiere. In the months many products went from 100 pesetas (0.66 €) to 1 euro 166 pesetas. Relationship sweet and sour. Herbert is fat ;-)) Thanks Pascal Derrien

#9
I have sent your thoughts to Herbie he says hi and thank you for the very nice words too :-)

Kudos, Pascal, on such a well written, creative buzzing blog post with super storytelling -- not to mention being very informative. Please send my best to 'Herbert The Coin" and keep buzzing!

If I may coin a well used phrase, Herbie, you appear to be well rounded from your travels, and are obviously much more than mere loose change. May you find companionship in deep pockets where short arms rarely reach.

We are like Herbert, as long as we have value we are remembered at all times, but one day we can fall into oblivion or lose our value as human beings, who knows until then we can enjoy this long journey acquiring knowledge and wisdom that will never be taken away.

Pascal Derrien Perhaps Herbert will again meet Padraig, who roamed the Dublin streets and pockets until 2002? As you do Pascal – entertaining, interesting and highly original.

#1
thanks Vincent Andrew Brexit is a bit of a mess fro all of us here and especially Ireland, to your question and great attention to details by the way I think you may be right but I got to check that one :-)