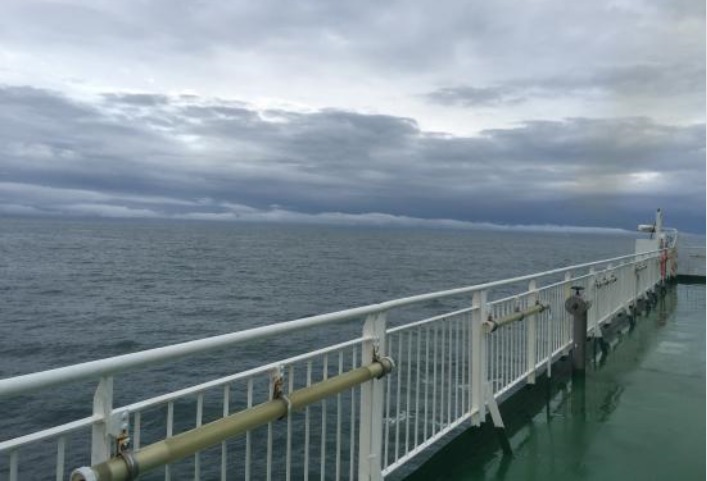 The phone box has a touch of red rust on its top, it’s not overly surprising when you think about how battered by the elements this place must be. The weather is not always clement in the parish church of Our Lady of Croaz Batz. Not much sheltering either for the handset hanging in this lonely phone booth in the Roscoff harbour.

This was my last call on French soil, it was a bit awkward to be honest what do you say when all has already been said. I bet my mother was probably wiping her eyes in the background while my dad tried to make good figure and cracked a light joke in a shaky and trembling voice. That’s it, I am emigrating as they say, in less than an hour I will be aboard an Irish Ferry for an overnight crossing towards Rosslare.

For now, my 205 Peugeot is sandwiched between two Irish cars waiting patiently to get clearance from the port officials. I have switched off the music, I am in no mood for a mixed tape so I am waiting patiently to get the green light allowing us to load our four wheels’ vehicles onto the Irish vessel. I don’t remember the name of the boat but the cars will be resting in there like babies in a large steel tummy while the journey will take its first steps into a twenty-three-hour nautical odyssey.

The night cabin is spacious but not exactly what I need to treat my restless adrenalin. Mobile or static an Irish pub is an Irish pub and there is always some craic waiting to be. Quicker than quicker I just take the decision in a jiffy, that’s where I am going to kill my anxiety. To whom it may concern you just need to know I ended up navigating thru the long corridors direction the local floating tavern.

I order a pint of black stuff; the barman tells me that’s what you need when the sea is a bit rough. The bar is a hive of activity: on my right, there an Irish family who is about to have their evening tea, on my left, two French hippies surrounded by three Irish lads, one of them I think is a driver licensed to pilot a long-distance lorry. I take a few more sips of the stout.

I am thinking that I am moving into a new country four weeks ahead of my wife to be, I am thinking from now on I will have to function with a new language as a modus operandi, I am thinking about my colleagues I left in Sony....

I am thinking about the words of caution that have accompanied my farewell from friends and family, I am thinking about that guy telling me that my name is not Connolly and how can I leave such a beautiful place as Paris. I am not certain because certitude is often eaten by fragility but genuinely I do think I end up asking myself how is it going to be?

I needed some fresh air and I am now on the ship deck, starboard to be precise. Pep talk to the rescue harbouring self-doubt as a positive engine, a force of nature cracking under the gentle pressure of the roaming events can you imagine? Its not the first time that I don’t know where I am going to stay but it’s a first for me to have a ticket which is only one way.

It was a short night and the sea was not even choppy. I am getting breakfast on board, do my best to make sure I am all set for a great appearance at the customs clearance, you got to look sharp to make a big entrance.

The car is quickly checked and a guy in uniform looked at my passport asking me how long I will stay, I don’t answer when he addresses me so he asks if I am OK. I don’t want to give him the impression that he needs to trigger an alarm bell so I declare that only time will tell.

I have driven four hundred kilometres from Paris to Roscoff in Brittany yesterday and I need to add seventy-five miles to get to Dublin and reach my final destination today.

As I am getting on the M11, I can spot a derelict castle and its crumbling tower I think I have seen it before. I smile, thinking how bizarre it is to imagine that I left the shores where I was born to find myself shouting

I am on my way home

#33
lack of choice or option indeed, there is a small Hugenot cemetery in the middle of Dublin with many French names for people who did not have one :-( Great film Brooklyn :-) thanks for dropping by CityVP \ud83d\udc1d Manjit

I found that through modern media and technologies there are days when I forget that I live in Canada, but yes, it was a different story when life was not globally connected for urban dwellers. It all comes down to our individual personhood how we handle transition, especially cultural transition. I think you will enjoy the movie Brooklyn about an Irish girl who emigrates to Brooklyn https://www.youtube.com/watch?v=moXpUBRw5l4 All of this of course as an ironic backdrop where populism is the chief thing marketed and globally we are having an amnesia that human beings have always migrating since our consciousness became human and the cave and club was not our condition. That is why I am speaking on top of the green hills of hope that life in the years ahead is no longer a marketed life but a human one. Coming to Ireland under circumstances of love are different from circumstances of persecution, so I was interested in reading the story of French protestants who emigrated to Ireland in the 1600's https://www.youtube.com/watch?v=FxLSbAo4ztE

#31
many thanks debasish majumder comment much appreciated as always :-)

It's always an experience reading your stories Pascal Derrien; a good and interesting one. Thanks.

#28
oh thank you Sara Jacobovici it is pretty hard to follow Deb :-) you know that

#1
#2 After I smile while I was reading your comment Deb \ud83d\udc1d Helfrich's response and have to quote that: "...it just came like that delivered in a confused package of words hugging one another, i just picked them they were waiting ...." Love it when the post keeps going on, spilling over into the comments and responses.

#25
thanks Sandra Smith , nice little city but you can skip the harbour :-)

#23
oh thank you Donna-Luisa Eversley interestingly enough the length of the trip gives you a sense of the distance accomplished and a more real and tangible feel about the purpose of the crossing. not sure how it would have been if I had taken the plane and the undertaken the two hours journey :-),

many thanks Pamela \ud83d\udc1d Williams for sharing your early morning strolls to the sea those are precious time windows :-)

#19
thanks Ali Anani I actually had the butterfly effect in mind or at least laying somewhere in the background when I put this together. Glad the post spoke to you so eloquently but these are just a few words put together :-)

Your experience moved and motivated me Pascal Derrien. You changed me and I am truly grateful to you. For me this is a very timely reading as I plan to write my next buzz on the effect of he butterfly effect on humans. Thank you

#16
thanks Praveen Raj Gullepalli roughly 225 million of us live and work in country different from their country of birth :- Rock on :-)

You captured me again with your journey. Who knows what lays in wait?

#11
thanks Gert Scholtz what does not kill you makes you stronger as they say :-)

Pascal Derrien Home is where you feel you have a belonging, family history and old friends. Moving too a new country is exciting but also very unsettling. I relate to your experience which as always you describe in your uniquely eloquent Pascal prose.

#9
indeed Dean Owen no regrets, don't do home sickness and other expats ailments I was already so mobile as a kid that I just pushed the boundaries a bit further but it looks like I am done with moving for along time :-)

Been thinking what to write. I can relate to every feeling you have described, and suspect, like you, have no regrets. My journey to find "home" is far from finished, but I suspect you found your emeralds. Ireland was waiting.

You have a great understanding of a lot of things to which people like me are usually insensitive.

#3
☺ah true this is Ken Boddie it seems diifficult to accept for those who stayed......

Though the journey's arduous, And our friends are missed, Home is where the heart is, That can't be dismissed.

#1
oh thank you Deb \ud83d\udc1d Helfrich it just came like that delivered in a confused package of words hugging one another, i just picked them they were waiting .... ☺