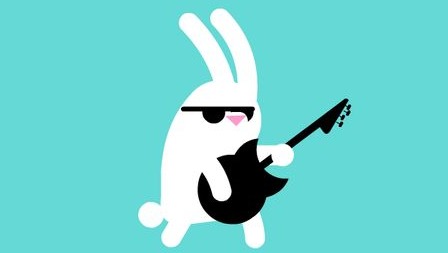 Yo Bunny B. here, I am in the house well actually it’s not my house it’s Pascal’s and he wants to take the mic to talk about music & stuff. Thanks Bunny B. bro or should I call I call you Long Ears it sounds more Cherokee like and it’s better for the street cred but well anyway let’s move on to the topic of the day carrot boy.

Where was I? Oh, yeah muzak, there is music around me all the time everywhere, in the car, when I run, when I interview bands, go to gigs or review albums, there is a radio in the kitchen, I even include music videos regularly it in my posts too. It’s kind of a visceral need for me I suppose it is almost pathologic at this stage.

My tastes in music vary grandly from my roots in Punk hard core to jazz rock, Hip Hop, metal, folk, alternative, pop you name it if its good I like it full stop no semantic. In my heydays of music journalism (sounds super, coolly right?) when I was reviewing albums and covering shows under the name of the lazy anchor journalists who could not be arsed to do their job (but kept the promo LPs’) I could be seen the same week at several gigs: Whitney Houston, the following day I would be at Fishbone, or you could find me @Jason & The Scorchers, Keith Jarrett or Robert Cray.

I am no musician but I like my guitar actually I really like bass guitar the most, Stanley Clarke, Stu Hamm, Jaco Pastorius, Cliff Burton or obviously Phi Lynott are doing it for me, but the best bass line eva is probably coming from a band named Fugazi from Washington D.C.

From the mid-eighties to the early nineties I was always on the hunt for music all the time but not having too much money complicated the equation. I would save money on anything I would skip lunches, avoid transport fares (not always legally :-) ), buy second hand clothes, get my hair cut in punk squats or sell my five grand-mothers.

I also loved walking for hours in Paris whether it was to kill my urban spleen or reflect on a tormented transition to adulthood I don’t know but my walking errancy was punctuated by fuel stops at a multitude of second hand records shops that were mushrooming all over Paris in those days.

I did not know all of them but I reckon there were probably between 200 and 300 shops in the heydays of vinyl. I would have made friendly with many owners and would have developed a network of music scouts that would keep some records aside for me based on the hints I had given them thru passionate chats and live driven exchanges.

The big advantage with second hand, exchanged or recently sold records was that the cost was not as prohibitive as a brand-new CD or LPs I could get almost 4 and sometimes 5 long playing masterpieces for the price of the costliest recently issued one. I became an expert at navigating thru the sea of covers and labels, I knew the producers, the sound engineers, the releases dates and other sequences of events etc. etc.

The great thing with cheap albums was that I could also take risk and become adventurous in terms of style or musical genre always well worth spending 10 francs who knows you could always bump on a true gem. I would come back home with more than ten records on a weekly basis and I had to become very creative storage wise too to accommodate the accumulation of 33s in my small room.

But the times they are changing, records stores have been shutting down en masse the last five years. That’s the new reality for independent owned shops who must adapt or move on, chain record stores have suffered too some closed some tried to reinvent themselves by setting up a café (low margin business) become a device centre rather than a music support provider but whether we like it or not LP’s and CDs are no longer a practical way to consume music. There were no record stores in the fifties and there will be no record stores in sight soon.

That said the LP’s is fighting tooth and nail and is not prepared to go down without a fight. I have read more than once in the specialized press that for the first-time LP’s sales have been neck to neck with other supports and have sometimes outclassed them in 2016 confirming a trend triggered in 2014.

I am obviously overtaken by nostalgia when I drop by my local Tower Records and see all the magnificent LPs on display but I don’t see this being more than a hype, a phase at best almost an anomaly in the worst case. This cannot be a sustainable modus operandi. Who can nowadays sit for 45 minutes and be glued almost religiously to a pair of speakers?

The choice is limited too, iconic albums for the most part, for me it is a bit like more of the same ,a rehash, a confusion between rehearsal and repeat. Music at least in my book is about new talents, innovations, disruption. It does not make me happy nor it does make me sad but let’s face the music, beyond the recent numbers, it is nothing more than an honourable but ultimate swan song for the gramophone grandfather.

It's a bit like air guitar there is a lot of gesticulation but it ain't the real thing no more. So long my friend and thank you for the music.

Well guys I think I got carried away a bit and I hope it was not too long. Now I just checked behind me and I think Bunny B. has fallen asleep on the couch, he is a funny character I was about to say furry but he is one of the good guys really so how about we dedicate him the following track. It’s a good one from Panic at The Disco best days. -Mad As Rabbits-

So, on that note folks, enjoy the video and see you when I see you

you are a musical poet Ken Boddie could not have said it any better :-)

Do you, Pascal Derrien, Remember When Rock was Young? Me and Susie Q had so much fun that it drove Queen out of the closet and, with No Education and No Thought Control, we had to replace that Brick in the Wall with a Rolling Stone. Eric was Burdened by all these Animals, like Surfer Joe, who Wiped Out that Yellow Submarine chasing Bill Haley's comet, with Blondie in the back seat, on route to the Love Shack. That's where the Trouble started when the Boss came in, closed all the Doors, and gave us the Byrd(s). God Save the Queen!

ah I did not know you could not do resale with grandmothers how disappointing there are pretty second hand grand mothers out there now some people exchange them but I think maybe you can do with one only I suppose '' a grand mother is like a mix tape they repeat themselves constantly'' this is a quote attributed to an unknown rabbit....... :-) Ken Boddie

#11
thanks Neil Smith I agree with the economic model forcing ? artists acts to tour and it is almost mandatory nowadays to perform on stage if you want to do this for a living. YouTube also has been good with live performances so what we miss in gramophone terms we gain in live digital exposure ?

Who are you and what have you done with Pascal? It takes a dedicated Mad as a Hatter Rabbit to acquire 5 grandmothers. I wonder if these are the same relatives whose funeral attendances have been the reason for a plethora of days off work. Incidentally, rabbits are illegal as pets here in Queensland, ever since the music journo-proof fence was built way back.

Haven't heard anyone mention Fugazi for years. Really takes me back. When I first moved to Ireland the local pubs used to feature some amazing bands every week. One especially seemed able to produce real headline acts willing to play to fifty punters in a little village in the back end of nowhere. Alas this turned out to be no more than a handy money laundering scam and once the Gardai got involved it spelled a serious reduction in live music in West Wicklow. You are undoubtedly right about the demise of vinyl, CDs and other recorded music but the good news I take from the rise of dodgy digital downloads and the difficulty of earning money through studio recordings is that I am seeing a growth in live performances again. This coincides with the rise from the ashes of lots of my high school soundtrack musicians and so perhaps we will all end up back down the local with great bands playing the sounds of our lives. Enjoyed the article.

#9
funny you mentioned Atlanta I saw Maroon 5 and Bon Jovi on stage in that city 5 years ago :-)

#8
Oh yeah! I am definitely a rock chick. I grew, starting in the 50s with the doo wop music and then graduated to the 60s, with some of my other favs being Bob Dylan, Jimi Hendrix, Cream, etc. Then I danced my way into the disco era! I've always been a rocknroll fan. My husband is a rock fan as well, which makes life fun. I listen to an Atlanta radio station that plays classic rock. Love it.

#7
these are the founders and deserve respect but there so many other talented bands that should be well worth getting a bit more air time, I did not know you were a rock chick Franci\ud83d\udc1dEugenia Hoffman :-)

Yeah, Devesh Bhatt - LED Zeppelin, Eagles, Doors , The Who Lynrd Skynyrd, CCR, Beatles, Bowie - and Queen, Pink Floyd, Rolling Stones!! Wow! Love Fishbone and I don't hear or see much about them. A real blast from the past. Rock On!!

#5
true actually the analog world/word came to mind when I was thinking about this post, it was indeed a different world Fugazi was/is something special to me :-) I have actually forgotten some shows I have been to which is sad in a way but what can I do my memory is analog too :-)

#2
for any great Band/performer of the past ...Nepal, Kathmandu, the new frontier, all the guitar loving population from the subcontinent will flood Kathmandu. LED Zeppelin, Eagles, Doors , The Who Lynrd Skynyrd, CCR, Beatles, Bowie..Etc etc not possible but Jethro Tull and Maiden have watched them live. I think Mark Knofler would be a dream come true here.

#1
nope not anymore but they have a strong follow up and have been touring consitently the last few years there is a good live DVD from a gig they have done in France :-) https://www.youtube.com/watch?v=yTazopKBl8c

Courtesy the time warp, fishbone and cliff Burton are still big here. Do you still have access to fishbone?