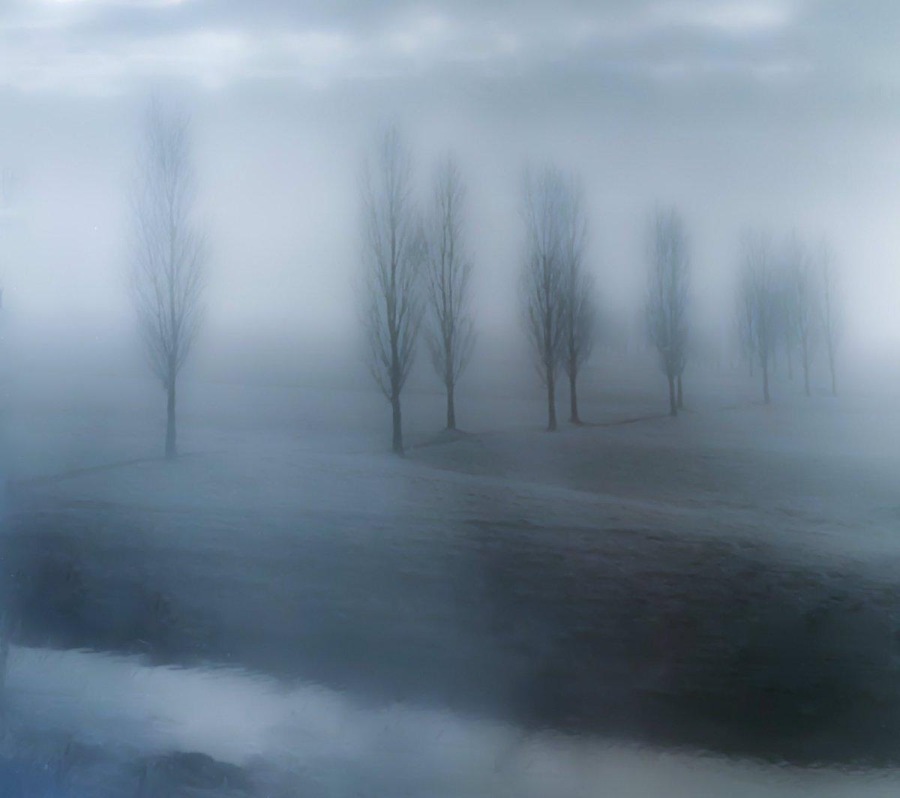 It was the same ritual everyday and I was welcoming the monotonous procedure with a feeling made of excitement, routine and bliss. I perhaps cannot find the right words but what I can say is that it was overwhelmingly more powerful and intense than anything else I had gone thru before. Its hard to describe the mindfulness state and enjoyment I was experiencing daily. I can remember clearly all my senses not being indifferent to the natural surroundings.

What a privilege to see squirrels, foxes and birds rejoicing themselves at the birth of a new day. While I was fascinated by my discovery, I remember noticing that the light was not that bright and that there was a constellation of water drops surfing on a sea of mist, the combination of both acting as a subtle notice pointing out that the sun was still engulfed in his dressing gown.

We did not do family holidays partly because we could not afford it and partly because we were probably not the type of family unit that was doing that. Instead I was shipped over to my grand father's stud farm in Normandy for summer holidays. I would normally spend around 9 weeks from June to September. From the onset of the mid seventies well into the eighties I spent about 10 summers in Normandy and I thoroughly enjoyed my time there.

I will spare you the details but my grand father had overcome quite a few obstacles in his life before becoming a famous and well respected horse trainer. I did not know it at the time but today people would tell you that I idolised and admired the man, he was probably the closest to what is considered as a role model.

Fair to say too that he always had a soft spot for me , and providing all the shenanigans I had already gone thru in my life at such a young age I welcomed the attention. It seemed though that despite never talking about it we had come to a tacit understanding that my time with him would provide me the relief and reloading power necessary to survive another uncertain and troubled year.

He was the regional yearling guru but he had a strong national reputation too, yearlings for those who may not know is a race horse considered one year old or in its second year. My grand dad had taught many promising trotters how to race and handed over many champions to star jockeys after they had acquired the necessary skills to become strong race horses, many Prix D'Amerique  winners were formed under his direct supervision.

Six a.m, I don't need an alarm clock,  I am ready, I have my wellingtons on and I am wearing a wholly hat even though it's July. A few minutes later I am sitting at the back of an American Jeep. I don't know how many times I have asked my grand father to tell me the story of that car. The multi-terrain vehicle was originally part of an American unit that had landed 30 kms away from the stud on D-Day. It is unclear how and why the car was left behind or how it ended up in the stud in the mid fifties but it had been part of the horse barn agricultural machinery fleet ever since.

I loved that car, anything from the rudimentary dashboard with the exotic English words to the circled and faded star paint on the bonnet, While the intriguing gear box had remained intact, the Jeep had lost its soft top a long time ago providing wind licking red faces passengers a true feeling of freedom and movement. I really admired too how easily the four wheels vehicle could absorb any obstacles set in front of its pathway.

For now I am sitting at the back of the ultimate land rover with the delicate mission to mind five bags of oats feed. It normally takes us an hour sometimes longer if an animal requires specific care. Trails, hills, or remote stables are all part of the regular itinerary. The two of us don't speak much but we are happy with each others company when we cover roughly about 35 kilometres each morning of the week.

I open the gates, I pet young ponies with always the approbation of their mum and I constantly make sure to be giving an extra helping to one or two of my favourite yearlings. I am useful, I am valued and I have a role to play, the 12 year old in me cannot be any prouder but being taken seriously and given responsibilities.

We usually get back around 8.30 or 8.45 to meet up for breakfast with my three other uncles who also work in the horse stud. We chat about the morning and the day ahead but very often I am just busy swallowing my first meal of the day under the amused eyes of my matriarchal grand mother.

As we all ease ourselves in the day to come, I cannot wait to be up the next morning imploring the stars to go to bed after the moon has kissed the sun good bye.

Pascal Derrien - awesome post! It also brought back memories for me, tiptoeing down the stairs at 7am on a weekend morning, boots in one hand to go and spend the day with my horse. I was reed thin - all that mucking out, chasing horses around fields so you could catch them, cleaning tack and grooming kept you very fit. Those Jeeps are so much fun to drive, they have a beach buggy version here which packs a punch, corners like a dream and goes like the clappers!

#31
ah thanks Ken Boddie I was thinking about posts longevity too recently and test of time. I think the nature of the topic probably helps well anyway its not for me to say maybe my kids will read them one day :-) Glad you enjoyed the read :-)

I envy the longevity of your posts, Pascal, and how they predictably keep risIng up again like the sun. Horses have also had meaning in my life, but that’s for another post and another day. Meanwhile thanks for bringing back memories of watching early morning thoroughbred hacks in the Newmarket area of England, and of dusty dawns in Bahrain mucking out at the sheik’s stables for ‘arabs’ past their use-by date.

Pascal Derrien on being a boy - freedom, adventure and safe!

You have filled me fresh with the sheer joy of childhood under a loving and safe guide - so very happy for you!!

#22
thanks for the kind words , a great pocket of oxygen it was :-) country side horses sun and awesome food :-)

Feels like a memory from yesterday so vivid. I was transported with you. You are an awesome storyteller Pascal Derrien and such a lucky/blessed childhood with grandparents, horses, the farm and all. Better than expensive holidays! My grandparents passed before I could remember stuff. Thank you for the walk down the memory lane :)

#20
great memories Lisa \ud83d\udc1d Gallagher thanks for sharing them, I did not incorporate it in the post but the smells in the morning bare the unwelcomed one obviously was also a travel of the senses it in itself :-)

This brought back great memories of the many times/hours I spent with my daughter on a few farms where we boarded her horses. We would go 5-6 days per week so she could ride or work her horse. I would spend time cleaning her horses stall along with many other horse's stalls while she was busy grooming etc... lots of work, no wonder I was in such good shape. Maybe I need to go back and clean poo again, wheel barrow and all! ;-)

Another welcome piece for the jigsaw puzzle that is Pascal Derrien

#16
Thanks Aaron \ud83d\udc1d Skogen glad it reminded you of good things. They have become increasingly rare on the roads the good old jeeps :-)

#14
Yes indeed we were doing a D project with my son recently and I told him how I did learn to drive on a Jeep age 14 and it then opened the memory gate Franci\ud83d\udc1dEugenia Hoffman, beBee Brand Ambassador :-)

A reflective blast from the past. Thank you for sharing Pascal Derrien.

#12
Many thanks for the kind words and dropping by Nandita this is much appreciated :-)

#10
Thanks Gert Scholtz to this day I always smile when I see one of those vintage Jeeps on the road.

Pascal Derrien I can feel the your excitement of those dawns where life promises adventure and something new. Good memories rekindled - for me as well. Thanks Pascal.

#8
Glad I could trigger a trip to memory lane @Julio Angel \ud83d\udc1dLopez Lopez :-)

You have reminded me of similar episodes, Pascal Derrien very thanks. ;-))

#6
thanks Ian Weinberg as authentic as I could remember it :-)

A wholesome and authentic slice of life Pascal Derrien

#4
thanks its like going back to the drawing board a rite of passage in a sense :-)

Ah, good things in life keep our memories afresh! And a well spent childhood is always an inspiration in the many phases of human life.

#2
you too dear Pascal Derrien! you not only share your reflections, at the same time the vision you vividly narrate, i just love to read those avidly sir.

#1
many thanks Debasish Majumder you are a gentleman :-)

nice buzz Pascal Derrien! enjoyed read and shared. thank you for the buzz.