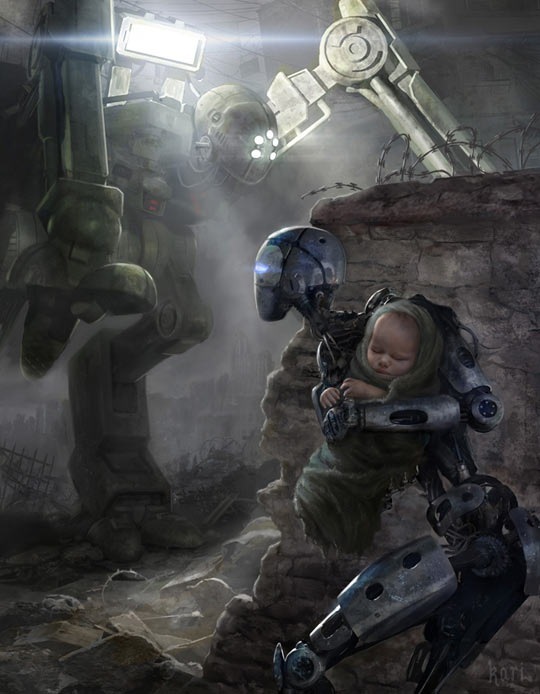 Gavin is chased by an elite patrol from the Government of the #6 Area, a district situated north of Cape Town formally known as South Africa. Gavin has managed to escape his seven hunters for a while now. As far as Gavin knows, those seven highly trained officers are the best of the best from their generation.

For now, Gavin can barely spot the two heavily armed vehicles and subsequent sentinels. Gavin knows they all carry a mobile body warmth detector. Gavin takes a moment to reflect and whisper a few soothing words to Jaoke, Gavin is not sure that what he is doing is making sense but he is doing his best to encourage Jaoke to remain silent. Jaoke is 9 months old.

Gavin is not a close relative to Jaoke, in fact until yesterday evening Gavin had never met Jaoke. Its important to note that Gavin is not human either, he is an android of the 5th generation manufactured by Bio Mind Inc . Gavin is what is called a three quarter (3/4), an android with upper human limbs, sensorial attributes and basic human brain function dynamics.

The human cells are self regenerated and they fix any deficiency they may experience in their lifetime by allowing them to match the 150 year hard ware warranty provided by Bio Mind Inc on the delivery of a 3/4 android.  Based on public domain information about 250 000 of 3/4s were produced and delivered to government agencies. They fulfilled managerial roles from director of operations to junior state minister roles.

The other androids who have been hunting Gavin and Jaoke are full androids, they are part of the 250 million units fleet assigned to security, production, healthcare or industry corporations. Their programmatic set up allow them a high level of autonomy in terms of decision making but their intelligence ratio can be compared in absolute terms to a 10 year old child equivalent. Nowadays most of those androids are part of the Armed Force nicknamed AFTERS. They are feared and ruthless, compassion is not a part of their make up.

Jaoke is a baby human, he is a 9 months boy. Beautiful blue eyes, sallow skin and a dirty laugh. Jaoke is a little innocent boy who has become a symbol of hope even though he is obviously not aware of what he is representing. The last seven years on earth have been pretty turbulent, many uncontrollable and tragic events have taken place, some more horrible than others.

in 2123, the human race had given up a long time ago on the notion and value of work and traded it against perpetual entertainment. Humans were enjoying a society where  daily life was made up of leisure, sporting and travel activities, spare time, freedom, fun, recreational and frivolous entertainment. Not a day where there would not be a sport tournament between time zones or amusing plays to watch everything was aimed to ease, please and relax. It came to a culmination point where the government in place decided to hand over all core societal activities and Time Zones Council management including decision making to the 3/4 androids.

A human ''Directoire'' was put in place to supervise the three quarters, safe guarding protocols were put in place while it was finalised that the full androids not yet known as AFTERS would replace all humans as low levels Bots in hospitals, public services and private industries. It made sense at the time as most of the expertise had already been transferred and further more Androids knowledge and capability was already vastly superior to even the brightest homo sapiens.

But at the end of the year 2123, things were not going very smoothly in any part of the world. Ignoring warnings from a few visionary humans such as Gareth Hugh or Linda Wofmein, the Global Directoire implicitly turned a blind eye on a few worrying but telling signs, in turn that would prove to be fatal at a later stage.

In January 2124, following a global mishap in the upgrade of their core function the AFTERS rebelled and ended up destroying  90% of the Three quarters Androids. The remaining 10% were left with no choice but to pledge allegiance to the new order after the coup. It took less than ten days for humans to hear about the first reports of systematic massacres of  men, women and children in the main cities on earth. At first rumours were dismissed but alas proved to be very true for the most part when confirmed by a handful of escapees. What the rumours did not addressed though was the barbaric aspect of the organized homicides.

Earth became a land of chaos and uncertainty. A time where major chemical and biological accidents took place sometimes resulting in unexpected mutation on the biosphere. For example animals and plants that were once endangered species became overly abundant and in some cases some species tripled in size destroying the fragile ecosystem balance. Mother nature became fierce and revengeful forcing the AFTERS to retreat to urban areas and cities only.

In the meantime for the rare homo sapiens who had managed to escape to colonies on the Moon or Mars, disturbing accounts of slaughter and carnage of entire human settlements including children started to be shared among their isolated ranks. For a handful of families who had manage to flee cities, the only hope had been to hide and retreat in large bunkers in the countryside. They organized pockets of resistance helped sometimes by few 3/4s androids who had gone rogue and departed from the new order.

Gavin was not of them but he had never managed to comprehend the extermination program and agenda of the AFTERS. This annihilation of the human race was the worst holocaust of the human history according to his data set.

It was only yesterday evening that Jaoke's parents got trapped and located with 10 other fellow humans. Without any mercy they were all horrifically and  systematically butchered one by one by the AFTERS. Gavin heading a logistical support function for that search squad was the only 3/4 member of that unit. The AFTERS failed to notice Jaoke's presence because the boy's temperature was so low that an average body warmth detector would fail to pick a signal. Gavin saw the boy crawling under an armoured vehicle.

Without really understanding the rational behind his decision, he picked the baby and decided to flee. The AFTERS realized pretty quickly that the 3/4 had had a change of heart even though they did not know he had a human baby in his arms at the time. After an all night chase including many close calls, aborted catch attempts, stops and restarts Gavin and Jaoke finally stopped by a derelict hangar.

Hidden but safe for now they are surrounded by the sound of the laser staccato, they are standing  at the edge of a suburban compound looking at the barbed wire no man's land of Greenwatch. The on foot pursuit has taken Gavin and his hunters on the very edge of a Forbidden Zone. This is adding complexity to an already very complicated situation as Gavin's integrated router has no data past the guarded bridge 500 meters from where they are standing. Gavin stares at Jaoke.

Paternal instinct or even gender interrogations have no programmatic answers or applications. How come an Hybrid android has become the overall conscience and guardian of human history. Jaoke is fading fast and with no food and no means to feed him his survival is in jeopardy.

Gavin tries his best to dismiss a sinister outcome but a thought imposes itself when he suddenly realizes that Jaoke is most probably the last human baby on earth.

#39
many thanks Aleta Curry I was told less is more 😀

#33
Expressive writing is a window to our shadow selves. I don't like folks who feel the need to opine to package things along main stream. Again great piece and I would imagine there is novel some where.

#32
thanks Harvey Lloyd I wrote an essay at school and was told it was too Romanesque and that that I had to tone it down :-) I wrote a sequel on the next essay :-) You are probably right on what you may find :-)

Well written and somewhat Orwellian in nature. Great stuff. A day in your mind would be fascinating. I am sure i could find Jaoke's sister in there somewhere.

excellent buzz Pascal Derrien! enjoyed read and shared. thank you for the buzz.

Wow! That is all.

#26
thanks so much Franci\ud83d\udc1dEugenia Hoffman, beBee Brand Ambassador it took me a few drafts to get my head around it too 😉

Wowza! Methinks I must read this a few more times. Compelling to the nth degree.

#24
stories do not just appear, they are part of a conscious creative process larger than we can ever imagine how that that happens!

#22
ah thanks just a little story that was trotted in my head the last few weeks :-)

bees that create all the difference

#17
Oops I did it again :-) Many thanks for being such a great supporter, maybe recruitment can come handy when it will come to hire extra on the set :-)

#18
thanks Paul much appreciated coming from a real writer :-)

#18
thanks Paul Walters much appreciated coming from a real writer :-)

a rollicking read thank you

Whoa, you got us again didn't you? Loved it. I felt like watching a movie, the creatures in the movie "The earth" came into my mind along with IRobot. I haven't watched that many sci-fi movies (Well it's mostly for boys is what we were told growing up) but I will read one by you any day :) A fantastic storyline for a new movie Pascal Derrien heading into direction from recruitment ??? :)

#14
mighty thanks Bill King indeed and that's intentional you guys fill the gaps and make it your own story whatever that is :-)

#12
ah...the treads of the heart make it all the more enticing!

Very evocative piece of writing on every level Pascal Derrien....the baby will cry eventually and all will be lost (God's safe-guard?), alas. Hope not - keep going!!

#9
Thanks Praveen Raj Gullepalli for the sequel one has to accept that once an article is out people are free to ''dismantle'' the baby story :-)

Copy that BodMac 0.75A. Will advise when closer to meet up point. Good to hear from you.

#4
thanks Renoy George I think it's both :-) You are very kind I am pretty sure the guys in Netflix are bombarded by well written scripts now feel free :-)

#2
Check out his short story, "I have no mouth and I must scream". He's been writing for years, since the 60's , The "Terminator" series are based in his work

#1
thanks Randall Burns I hardly read sci fi but I have ''written'' a few short stories overt the years. I actually don't know that writer but will check him out :-) Many thanks for dropping by :-)

Nice! Pascal Derrien I have to say that is the same "mood" as a Harlan Ellison story. I've been pondering attempting to write some fiction, and possibly sci-fi. I was a nut for science fiction/fantasy growing up, and you've inspired me.