What If It's Not Viral Doctor? 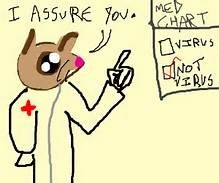 I was kind of thinking the other day that blogging is to writing a bit what hip hop was to the music industry in a way. I don’t know if you remember it but the music establishment including the labels business managers did not wear their welcoming hats when it came to the first hip hop artists partly because they did not recognize the artistic value of the genre and most cynically because they could not get around a way to monetize what was vastly an underground movement at the time.

Sampling was considered stealing or plagiarism at best, spoken words were mocked and the overall urban poetry was undermined as ghetto talk but personally I see a lot of commonality and similarities with the bloggers of today whether in terms of intent or vibrancy. The democratic aspect of blogging does not sit well with the self- obsessed and status thirst driven wanna be elites who all want to be recognized as published authors.

I know what I say makes your writing sounds like a processed pizza right but who cares it maybe delicious still. If you have suffered from recognition syndrome it is OK you are not the only ones and clinical testing has confirmed there is an outbreak of ego maniacs on social media who all thrive towards influencing status and recognition, the prognosis is that it won’t get any better any time soon.

I said it a few times and others have confirmed I am not styling myself as a writer, I am no writer let alone a story teller maybe I am a blogger at best, I could settle for that because to be honest you and I know it’s unlikely I will ever write the sequel of War and Peace. I am in the vignette business where a long form read may not excess 7 minutes (on a good day :-) ).

But this is social media land and the paragraph above is already obsolete, I know I am already a dinosaur with my blogger definition because due to an increased incidence of norovirus infection among its residents nobody really gives a toss about content in social media, similar to the Hip hop underground scene it has already been swallowed by mainstream.

Despite what we would be led to think by community managers the content is not king, shallow is the name of the game. It is about the number of followers, it is about the number of shares, algorithm galore, exposure on every shore, ''virality'' I was about to say virility :-) All the spin doctors have the one and only prescription that will make you a star, you are going to be viral my friend!!!!

What would you do to be a famous for a day, I know a lot of people who throw their old life in a digital ashtray, they would happily jump in any of digital black holes on offer. Get the latest marketing suite to optimize, prioritize, monetize and all that jazz. It is no longer important what you say, do or write it is about the shallow being on show, some are even making a living out of it albeit a very short cycled life span but none the less they do…

Sometimes when people with no obvious talent reach the stardom social media kingdom it tends to bother what I call the super nerds, Steven Pinker in a book that I have not read call it the curse of knowledge. That curse sometimes takes the form of articles, acidic comments and other pseudo demonstrations, not to be confused with constructive criticism the super nerd is on a crusade to prove that he is right and that he…. indirectly should be recognized as the ONE, he has published books you know.

He (very often a man I must say) is doing us a favour by mixing with us the plebe, and he should be given a special status because he hangs with the likes of us. Elitism and populism are two sides of the same coin and thrive towards the same target.

So, doc what if it is not viral then? Listen if you start believing in your own hype you are doomed and it will only be a matter of time before you get booed so don't worry I assure you it won’t last and if the symptom persists relax the head and take a

#43
hmm not super encouraging if SM is that mirror indeed, personal brand etc... hey :-) thanks Aurorasa Sima if this post gets more viral I will have to consult it is not healthy :-)

#44
I agree Michael Rana, we are digital goldfishes :-) (sorry to the fishy)

#45
thanks Michael Gorman , syndication is something have indeed not mentioned good add on :-)

#38
Lisa \ud83d\udc1d Gallagher I am truly blessed to have people like you reading my broken prose It s like being in garage band for me I don't play very well but I like it :-)

Well you made a great case with this 'blog' Pascal Derrien, with the exception that I think others may beg to differ about your talent as a writer. I enjoy your WRITING. Writing is as unique to the person penning it as it is to the reader. You won't find me reading an article about digital programming but many will read that article and enjoy it, just like those of us that read various other articles like yours and relish in it.

#28
with your advice I am going to be at peace with the on going war that was going on in my head telling me that sequel was necessary for my how do you call it.... credibility Aleta Curry and maybe I should tell you know I have written the Gone With the Wind Sequel :-) (just joking somewhat :-) )

#29
yes true the editorial piece is indeed a good point of view, I used to manage bands and while not strictly my role I was used as sounding board thanks Joshua :-)

#30
Thanks @Doc Ken Boddie :-) for this pertinent observation

#31
many thanks , when the underground cannot stay underground what are we left with ? :-)

#28
And here was I, Aleta, thinking that the sequel to which you refer was a pharmaceutical flatulence med. 🤔

#23
Franci\ud83d\udc1dEugenia Hoffman my kingdom for a horse I mean for a post :-)

Different strokes for different folks. King/Queen for a day. What goes up must come down! Good post, Pascal.

Kevin Baker I am wearing magnetic boots even when the floor is not too sticky just in case.... :-)

#17
thanks Praveen Raj Gullepalli indeed I think humility not to be confused with lo self esteem or its opposite is actually in short supply :-)

#15
thanks Sara Jacobovici you are very kind, voice and vision of self, I put stuff out there with no real purpose maybe it is cathartic maybe it is more effective than a shrink session I would like to think I do it for my kids and if I am lucky enough to have a few others like you that do like it is a bonus , I got a nod once from Daniel Roth on LI he did let me know he liked some of my stuff I did not know what to do with his comment I would be very ill equipped if this article was becoming viral :-)

I love the parallel with Hip Hop Pascal Derrien. Nice perspective. It's all about a voice, isn't it? Communicating and being heard. Writing, with any tool. I'll never forget the visceral experience I had when I stood next to the Rosetta Stone, (many decades ago) before it was "exhibited" and was just "sitting" there on the floor. As long as you write Pascal, I will enjoy the experience of reading it.

#13
thanks Kevin Pashuk for making that essential differentiation about being different ...but talented. :-) Good year to you :_)

While our music tastes may vary greatly Pascal, I do agree with your thinking in this piece. There are a number of musical genres that were on the fringe (even the stuff I like which are now more mainstream), and the musicians were doing what they loved - they did not follow the prescribed rules for success. So it is with blogging... but... and it's a big but... the groundbreakers in music were skilled at the craft of music... they were no garage band slouches. In the same way, those who write (and blog) on social media should both have a passion for sharing their message, but also the skill in the craft of writing so the end result is somewhat readable. A Happy New Year to you and your family!

#5
#6 I promise you guys that my flu shots are up to date, along with my anti troll shots, but, just in case, perhaps we should drink that toast out of separate glasses? 😷

#6
Pamela \ud83d\udc1d Williams not sure if it is the new Kool :-) the fame epidemic is concerning indeed but Don Quixotte(s) will always find something to bounce their words against :-)

#7
Dean Owen you reminded me of my mid 20's when I was writing stuff on a booklets and sharing with my friends on the phone I have a follow up of two people in those days.... they don't speak to me anymore :-)

#8
Gert Scholtz you are too kind it is just a bitt of Verbal diarrhoea :-)

"But this is social media land and the paragraph above is already obsolete" - This made me kinda sad, but perhaps you are right. Perhaps, just perhaps, it might be better, and certainly more romantic, to handwrite what we do here on social media in a journal. Where's my fountain pen?

#4
many thanks Ken Boddie I need to hurry with a Cheers before I get a touch man flu :-)

I don't want to spread a flu. Just rid myself of motions.