The March Of The Trees 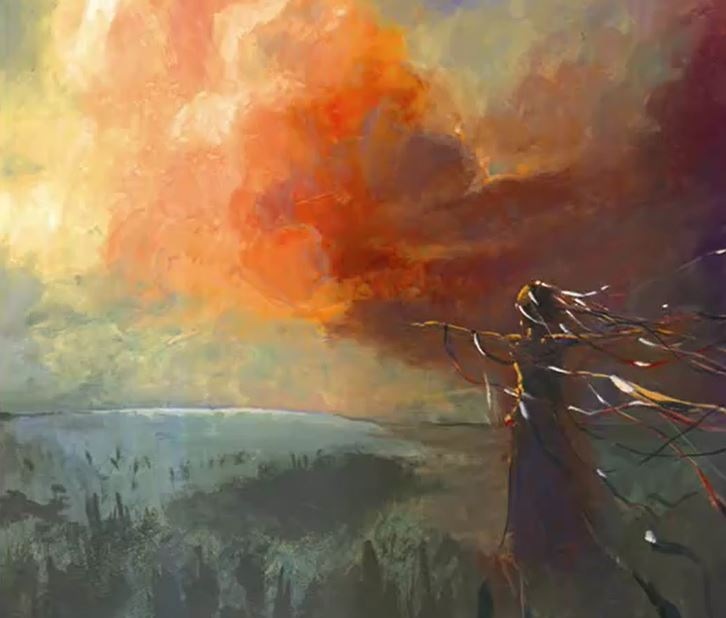 They were all on their way, the Cedar trees from Lebanon, the mountain pines from the Italian Alps or the giant Sequoias from Yosemite. From roots to needles , from wild leaves to elegant ramifications, from skinny young alpine trees to large wooden trunks. All were marching in one direction. Never before trees from far and wide, from over the hills and far away, the very lungs and bones of our world had made such a poignant attempt at raising the ultimate alarm.

It was truly unique. The Black forest was travelling ''en masse'' towards Berlin, on the other side of the ocean the Amazon forest had undertaken a trek direction Rio while Yosemite demesne had set course to the UN HQ in New York. The latter was led  by a very ancient oak called Tomoak.

Nicknamed Tomoak by his peers, the old tree was one of a few handful wooden giants who had witnessed the dangerous human derive over the last two hundred years. Tomoak did not master the human language perfectly and his voice could break at times but it did not take a superhuman effort to realize he was determined to speak up about the irreversible on effect of the human civilization on the biosphere.

Here he was, accompanied by thousands and thousands of wooden companions. Maybe it should have happened years earlier maybe they left it too late. The important thing was that he was now standing in front of a human delegation. The men and women were as much struck by surprise than they were by the audacity and the solemnity of the moment. Silence prevailed among the national guards, onlookers, officials and scientists alike. Anxiety, expectation maybe trepidation even was palpable almost tangible. There was no doubt all were witnessing an historic moment. These were defining minutes indeed, one could sense there would be a before and an after.

With apprehension but without any hesitation Tomoak started what was probably the most poignant and emotional plea the human race had ever heard. His voice was guttural and slow but his message was loud and clear. At the end of the short address, one would easily notice that a few trees were crying what were unexpectedly drops of blood. Almost immediately after Tomoak last words, a melancholic and repetitive chant virtually a monotonous lament emerged from the multitude of acorns holders. Some trees were on their knees while many others pointed their tired branches towards the sun.

The men and women remained silent, petrified by shock, frozen by an unspoken anger or were they ashamed by their ignorance and inaction. No longer it was time for altercations or interrogations, arguments and semantics were a sign of the past. It was obvious they had passed that line of demarcation a long time ago. The air was charged with anxiety and fear. All you could hear was the grieving tone of the trees about a world gone mad.

Tomoak had spoken about the grand collapse, the inevitable catastrophe, the inability to turn back the clock. He finished by stressing out the need to realize how unprepared Earth was for the biggest adverse  event of its history. Unease and twisting their heads from left to right the humans were looking at each other with incredulity, every set and pair of eyes saddened but smitten by the old tree's charisma and soft authority.

A small boy who was perhaps only eight or nine had not paid too much attention to the words that had been just said. Partly distracted but more likely overwhelmed by the great oaks presence in the city. He finally broke the silence and asked his father next to him what the old tree had spoken about. His father gloomily answered.

He is the one who knows the world is about to decompose.

''Through action, a Man becomes a Hero.
Through death, a Hero becomes a Legend
Through time, a Legend becomes a Myth
And by learning from the Myth, a Man takes action''
Unknown﻿

Such a beautiful piece Pal Pascal Derrien carthatic! We take and take and take! It is a cry from deep within and yet the human race chooses to be blind!

#30
thhhhhhaaaannnnkssssdd very much glad you liked it 😊

#26
Unfortunately, the total destruction is also a possibility. I wonder what kind of life form will survive ... perhaps fungi?

#25
that’s a fair point Lada \ud83c\udfe1 Prkic it seems that past the initial mobilization a few years ago the general apathy has taken over recently we always hope for the best but what if not ...... that’s also a real possibility

Pascal, the last sentence leaves no hope for the world. Decomposition is the process that feeds new growth. I hope it will still be new growth. 😟

#9
Franci, yes unless we guilty of one of two things-: mythomania (an abnormal tendency to exaggerate or tell lies) or mythopoeia (making of a myth or myths) In other words creating a myth for our own nefarious purposes.

#11
I think I am merely relaying the message from those who truly understand the issue since I don't have a scientific background I thought this would be my little contribution :-) I so wished it would not be true :-(

#13
Debasish Majumder glad you enjoyed that one , Tomoak says thanks :-)

as always a fascinating buzz Pascal Derrien! enjoyed read and shared. thank you for the buzz.

If ‘they’ won’t listen to David Attenborough then, just like the walking trees, we’re all ‘rooted’.

That was some statement, my friend. All the more frightening because of the truth it told.

#9
thanks Franci\ud83d\udc1dEugenia Hoffman, beBee Brand Ambassador Madeleine is making a lot of sense 🤔

“When we lose our myths we lose our place in the universe.” ― Madeleine L'Engle or so they say!

Wood have if only could have. But alas time is short and the withering, well underway!

#5
thanks Praveen Raj Gullepalli as often your comments are so much more than just..comments :-) I really like the Myths writing piece too :-) ''A more incomprehensible race has never existed, which would smoke venom, to choke its own lungs''

#1
thanks Don Philpott\u2618\ufe0f going full circle is what we human do as species :-)