The Knights of Young Hood 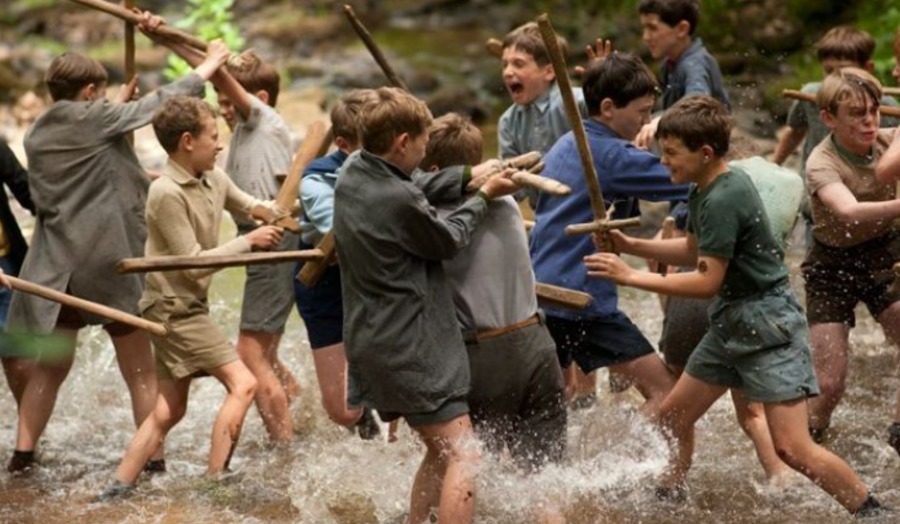 Touleno was based in Lanester, a small city located in Brittany. Touleno, what a funny name, was one of those social moderate rent complex so popular in the 70’s. Probably around 200 hundred families mostly coming from a working class background lived there. They had settled besides two parking lots supplemented by a playground located on the East side while the West had been granted a green patch serving as unofficial football pitch.

The local amazon forest was composed of a pine hedge at the corner of the pitch, I loved living there If I choose to ignore that’s where my loyal cat decided to leave the week after my father’s first suicide attempt.

For some reasons the East kids and West kids did not mix much but because of my nomadic existence I had been probably the only one roaming freely on each side. Was it influenced by the film Ivanhoe being shown on one of the 3 national TV channels the previous Tuesday or was it a pure coincidence, the thing is that all kids suddenly developed a passion for medieval outfits, knights, armours and wooden swords. Within three days, an East and West garrison were formed, flags were created and for those on the West side a fortress was set up inside the pine hedge perimeter.

Around 17 kids formed a light horse regiment in the East Camp while the West troops soon to be called The Knights of Young Hood were composed of 19 juveniles mounted regiment supplemented by 7 pre-schoolers and a disabled captain stationed in our pine hedge citadel. On paper the West was largely superior and despite having friends on both sides I ended up pledging allegiance to the West simply because I was living on that side. With training and pressure mounting on each side, it was only a matter of time before some belliquous elements of the other camp decided it was time to confront us.

The provocation took the form of a projectile aimed at our citadel captain Gregoire. Shock, horror and disdain called for reprisal, we would defend and protect our own considering this a despicable act. Samuel and I acting as scouts immediately got on our imaginary horses to localize the position of the enemy squadron. I had a large wooden blade while Samuel’s weapon of choice was arrows, bow and a short wooden knife. We confirmed the position to our commanding officer, Herve, an inspiring 10-year-old.

Based on our information, Herve laid out the following plan for us. We would go home for dinner now and because it is June we agreed to all ask permission to go back out, the key in all this he told us was to skip the ice cream man and his treats because he was adamant the other guys would not…. This would be the very moment choosen for us where we would strike with a formidable force, they would not even have the time to have a fist lick at their frozen treat. We all agreed that this genius outbreak could only lead us to victory.

Everybody got a green light from the adults including the pre-schoolers except one, the latter group would form our rear guard. We would all attack at the same time, I was on the right flank with Samuel and Jacques. Screaming our heart out, our squadron fell on the opposition like fire and thunder. Seating in their sand pit HQ, they were very surprised and shocked by our audacity, but they were also clearly not ready to go down without a fight.

They got their act together quickly, Jacques was hit by a tomato, Herve was injured with an egg. Samuel check your right!!! Samuel has just escaped a projectile and he winked at me, his smile whispering an excited thanks pal I owe you one. They defended their territory tooth and nail, but we were vastly superior to them in every compartment of the battle field.

After 10 minutes of a heated confrontation their CO called it a day, he called his troops to abandon the fight when he saw our rear guard entering the arena. It was a comprehensive victory for the Knights of The Young Hood, we made numerous prisoners and captured 3 bottles of lemonade, a large bag of crisps, we also took their weapons including one broken shield and two broken arrows. Herve was handed over their magnificent red and black flag as a formal act of rendition.

The pain of losing was palpable on most of the faces of our opponents. What a glorious day for the Knights, shortly after our respective commanding officers Herve and Lilian agreed a ceasefire without any conditions for the remainder of the week. For now, and despite our adrenalin pumping up our brain cells it was time to go to bed.

I often think about the Knights of Young Hood, I bet many of them turned out be great human beings, I only heard about Samuel once. In the first year of the nineties while most of the boys of my generation were anxiously trying to understand if we were only a few weeks away from being drafted, my mum found out that Samuel a professional soldier by then, had been awfully wounded in what we called the 1st Gulf War. As for the others, I often wonder

Where are they now?

#37
weapons of mass destruction eh? Sounds like part of a weekend project here in SA.....

#32
Sorry to leave the ladies out of my comment, Claire, but I was hinting at the many idiotic alpha males (including a variety of world leaders) whose brains haven't yet reached puberty, but who play with an assortment of weapons of mass destruction. Most female world leaders appear to have much more common sense, that rare attribute which, in male leaders, is remarkably uncommon.

My favourites are WD40 and silver duct tape - the stuff they use on movie sets.

#28
Thanks Helena I can see you were a young entrepreneur :-)

#30
Thanks Ken Boddie you wre obviously alreeady a poet when you wre 8 I bet :-)

#29
thanks Michael, family feud sounds like Romeo and Juliette to me :-)

Well, you much watch out Ken Boddie - for the girls that play with boy's toys and win! My Bradel and my Penknife are my favourite tools. Also woodglue, lots of woodglue.

Boys will be boys with boys toys, but when mean are boys with men's toys .....

I was cruel very cruel as a kid - had a great tree house and only allowed my younger brother and his friend into the treehouse if they paid an entrance fee of 3 x Star sweets which they had to buy with their pocket money - worse though they could only stay in the tree house while we were chewing - lots of 'you're chewing too fast' I showed no mercy - out they went when the sweets were gone but the downside of Star sweets are that your mouth is stained pink for ages and my mother could swing a cane or wet kitchen cloth across the back of our legs faster than we could get of the way when she cottoned on what I had done! Great sweets though!

#25
Gert Scholtz I am pretty sure that your saturdays were more exotic than mine :-) I may have seen a rat once and ran away in horror when I saw a VERY small snake..... what can you say i am an urban cowboy :-)

Pascal Derrien As young boys our Saturdays were spent at the river. Swimming, swinging from ropes, floating down river on tubes, even then we would have our own “braai” at lunch. Inevitably there were different groups of boys and mud fights would ensue. The local version was to put a piece of clay onto a stick and hurl it at the “enemy”. Sometimes we would sneak a few pebbles into the clay mould – a hit would sting for hours. Such was life back then. Thanks for bringing back these memories Pascal.

thanks Franci\ud83d\udc1dEugenia Hoffman I had a very sophisticated tree house that I had built with my cousin at my gran's, a home away from home :-)

Memories of our childhood - aren't they great! I used to climb trees and use them as my lookout posts. Even my parents could not find me. I also had a few imaginary friends. I wonder where they are now. :)

#20
thanks debasish majumder you are right with your comment on nostalgia I actually was smiling my head off when I was in the process of writing this :-)

#19
thanks Pamela \ud83d\udc1d Williams I see the ecologist vocation in you came early :-)

Guerilla fighting in the woods #101. I also made bear traps etc. etc. I was quite a force to be reckoned with when I was 8.

Years ago we ran wild in the woods near our home, with home-made bows and arrows..... I was always a Red Indian. The cowboys didn't last long.....

Pascal Derrien I"m tempted to say something along the lines of being an empath but that's likely to land me in a world of hurt!

#13
ah thanks Don \ud83d\udc1d Kerr get the extinguisher quick !!! speaking of fire it is actually the theme (somewhat) for my next post how did you know that ? :-)

Pascal Derrien The unbridled joy of our younger years. You're on fire my Irish bard!

#11
thanksMartin Wright I am looking forward to listening to it :-) feel free to share on this thread

As I read this the music in my head was a piece by Ennio Morricone written for a childrens programme - i will have to find the title. But once you hear it - it will make sense.

#9
thanks Aaron Skogen despite anything else that may lay in the background kids often have this ability to lighten up when they have the opportunity to do so, I am a proud veteran of the Touleno battle :-)

#3
Merci I can see you are an History expert , a fact based connoiseur Paul Walters I knew we were writing History, to all unsung heroes then !!!!

#2
thanks Julio Angel \ud83d\udc1dLopez Lopez for dropping by, oh yeah the Spartans I loved their outfit and helmet in particular :-)

Cutlings you 8 year old's must have been. Great buzz Pascal Derrien We often lose contact with our childhood friends. These are beautiful memories.

Pascal Derrien This is right up there with the battle of Waterloo. The planning, the strategy, the heat of battle and the comradery .... A chapter in history not getting the attention it deserves, quite frankly its shameful!

Ours was a smaller number of battalions, but the battlefield was broad. Wooden swords, bows and closed pine cones. On Friday afternoons I was only the Spartans of the "Union" all. My mission, to make a presence that they saw me and not to take me. What memories ... Thanks Pascal Derrien

I hate to say it but this so very cute!