The Cave In The Basement 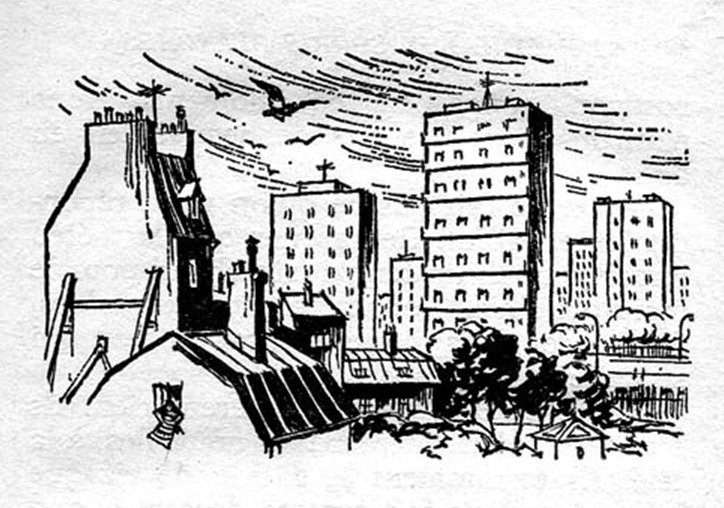 November 1978, somewhere in Brittany it is about 6.30 in the evening, it’s dark it’s cold and I am sobbing. I have some difficulty to come to terms or comprehend how I have ended up in the basement of the 5 storey building surely a 10-year-old should be watching his favourite TV show in a cosy chair and warm living room. Well not me and that would not be the last time either.

Two weeks prior on a Sunday evening I spent an hour playing soldiers with my dad, we had great fun I had the American GIs and Gurkhas Squads while he graciously took the Japs and German units. It was brilliant fun and I thoroughly enjoyed every single minute of it, it had not happened very often and I did not know that it would probably be the last time I could share such a moment of uncomplicated complicity with my father.

The following day was a big day as he was going back to work after 7 months on medical leave, the GP okayed his request to get back to the work force providing he would avoid stress and not put himself under any type of pressure. His employer agreed to give him only 4 slots a day in a tight geographical area as opposed to 10 for a regular engineer.

After a great first week things started to deteriorate but I did not know that, on a Wednesday which was traditionally an off school day he took me with him on his round of appointments, I was looking forward to it as I would be able to carry stuff and pass the tools and I may even get a glass of juice and a biscuit from the customers. The morning was fine but I got concerned when he swallowed three beers at lunch time followed by a couple of others later on, having not had a drink (I suppose) it went straight to his head and we ended parking the car on the side of a dual carriage way and at my surprise and completely ignoring my presence he felt asleep.

A few moments later probably two hours during which I spent my time starring at the void of my young life he finally woke up and we drove back home, he drove too fast, I did not like it, I was scared and he knew he was not in control, the car skidded twice and the second time the rear of the car hit a field wall on a sharp bend, hardly enough for the car to have its direction altered significantly. He managed to stop, I think the dramatic event had sobered him up and he implored and almost begged me not to mention a word of this to my mother, I reluctantly agreed.

13 days later he had already been put back on medical leave for a couple of days when I got back home from school. Since I had my own set of keys I opened the door and let myself in for an evening snack, I put a vinyl on the turn table, don’t remember what it was but it was probably too loud as my father stormed out of his room like a fury and started to roar at me insanities and other insults that I would not even dare trying to reprint here….

Was he intoxicated or was he having a bad hang over I don’t know which one is the worst of the two, thing is that I made an attempt to answer or articulate some kind of thought but even before any sound came out of my mouth I found myself thrown out vigorously against the wall while I was shouted to get the hell out of his sight….

I was shaken, upset and shocked. I took my keys and the door was slammed behind me, without really thinking my automatic pilot led me to the basement and I found myself opening the locked storage compartment where our two bikes, a sofa chair and bunch of tools were stored.

It’s dark it’s cold and I am sobbing my mum won’t be back before 9 in the evening from her cleaning job and even my loyal 5-year-old cat had thrown the towel and left the house two weeks’ prior…. My mind was in ebullition I had too many conflicting thoughts rushing thru my head, adrenalin is not always a good counsel. I had decided I would stand up firmly from that point on and I even convinced myself that I would kill him the next time. I also told myself that I regretted saving his life 7 months ago, little I knew I would again avoid a fatal outcome on a second suicide attempt 10 months from that day….

I managed to calm myself, grabbed a blanket, took a torch and started reading some of the books that were in a cardboard box, Le Club Des 5 and Davy Crockett were some of my all time favourite and there was a copy of each, I made myself small into the compartment, luckily enough our storage unit was one of the last at the end of the hallway and I would make a point to remain silent and almost invisible in my makeshift grotto when some of the neighbours were picking up stuff or brought bags to the trash bins.

I wrote in another article than sometimes I was not always sure if I could go home despite having a key, my grotto became my secured shelter when I had not the courage to climb the 4 stairs and face whatever unpredictable scenario destiny had in store for me.

Alcohol and its cohort of twisted excesses, hang overs and other derivatives had come back  with a rage in our lives. I did not know how to deal with this, my mother was in denial and I had been very discreet about the fact that there was a

Cave in the Basement

#26
thanks Sara Jacobovici maybe it is helpful for some hopefully :-)

An important story Pascal Derrien. Well written and straight from the core.

An important story @Pascal Derrien. Well written and straight from the core.

#24
thanks Laura Mikolaitis not sure originally I could or should write about 4 to 5 topics this year that were very personal, in the end besides the need to position it as a sharing excercise and not self pity it seems to have spoken to many if I judge by the overwhelming messages I got off line. Life is not perfect but great we only have one anyway so better get on with it :-) u just to get rid of excess baggage evrery now and again :-)

#22
thanks Vincent Andrew your view point is extremely valuable and help put things in perspective thanks to you :-)

#18
For non-promotional reasons (and I mean this), please share them to my hive so I don't miss them Pascal Derrien. I check my hive every day or two at the least. You are a very kind person and I'm sure your experiences shaped you for the better!!

#17
actually Lisa Gallagher you are right I have only scratched the surface on 3 to 4 articles maybe later...... thanks for your caring comments as usual :-) You are a great human being :-)

Pascal Derrien, thank you so much for sharing your story. I'm sure it's a story you don't share often because it's painful. No shame, just pain. I'm sure your story is much deeper than what you shared since I know someone personally who grew up with an Alcoholic dad and step mother who was both co-dependent and an enabler. I would hear one horrid story and possibly years later when I didn't think the stories could get worse, this person would let another story slip. Maybe that's half the battle, getting it out there and validating your own pain which is healthy. I'm so sorry this happened to you. I can't imagine the fear, I'm glad you were left alone (even though that had to be uncomforting too) in your 'cave,' your 'safe place'

#3
Thanks Aurorasa Sima I am unsure it is courage I think people in Syria or any other troubled country have courage, I think it was driven by necessity maybe a bit selfish too, however I think I get what you meant so ... Merci :-)

#4
thanks Mark I suppose I was the not the only one I am pretty sure others have heavier background but I guess we have a common understanding of how destruction function many thanks for the comment sincerely yours Pascal :-)

#5
that's a thumbs up from the Chief Story teller himself many thanks Don @ Don Kerr :-)

#6
Indeed Praveen Raj Gullepalli things settled when I was about 17 when i survived a car crash, he spent 20 years trying to mend the mess he had created we were kool I somewhat forgiven him but I cannot forget..... :-)

#7
Hey Cyndi wilkins this a very nice thing to say :-)

Wow Pascal Derrien...I love how you shine a light on the dark corners of your mind...This made me want to reach through the veil and give that little boy a huge hug;-)

#1
Indeed Happiness @ its lowest I suppose , Thanks for reading and commenting Aurorasa Sima :-)