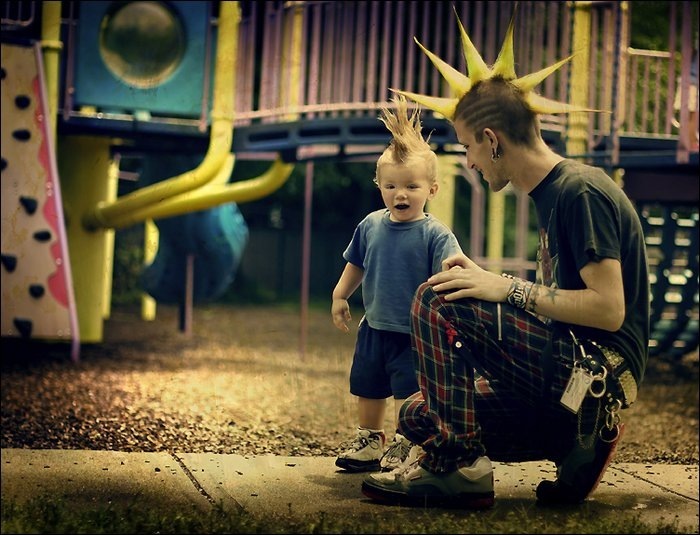 I have never really been ambitious. What I mean by this is that I don't really give much time or value that is to goals obsession. That said I have achieved quite a lot (at least by my standards and) maybe more than most but I have never really let those milestones take over my life to a point of fixation.
I don't get stressed with materialistic items, you see I go with the flow and it sometimes drives people nuts. I was told numerous times that I come across as somewhat detached that I don't relate to my surroundings or minor things. It's not indifference I can tell you that, I just don't have an unhealthy and compulsive preoccupation with success, future or money.
When I was a teenager I was content enough with having a roof over my head, some food on the table and enough money to get by for the week. I did not go very far at school but as long as I could buy a bit of music, pay my monthly Parisian metro pass and attend cheap rock or punk gigs I was happy as Larry.
Since then, I have travelled a lot and to many places (sometimes too many too). I have worked for prestigious companies, got work titles longer than a Ph.d thesis, I have indulged in earning big bonuses and managed too many people and their egos that I care to remember. I was awarded more stock options than I thought I would ever have and have subsequently sold and got rid of all of them. It was fun at times, exciting, thrilling stimulating and even exhilarating but in the end this was quite superficial. The illusory aspect of those years did not mask the electrifying need I had to find something a bit more authentic than just showing up in corporations selling hugs and kisses one day and stabbing you in the back the following one. I left.....
I like start ups, social enterprising, charity work, volunteering and writing. Most of that stuff is not economically viable but like my running and cycling it makes me content. I am lucky enough that the last few years as a family unit we have made sure that without compromising ourselves we  have secured a roof over our heads, that we have enough food on the table and enough money to get by.
I don't want and don't need a bigger house or a more powerful car. I don't need to be part of the cast of characters playing in the shiny show either. With so many nobodies having in mind to become the icons of the new day, no thanks I will pass if that's alright, that's all I have to say. I am going to leave it to others who adore the burn out, I think there is a long queue enough at the self obsessed individuals check out.
In a few years when I will be getting older and not too far from the eve of my existence I hope I will still have a roof over my head, some food and enough money to get by while my kids would check on me and regularly drop by.
With any luck I will still be able to buy a bit of music and attend a few gigs, frankly it's funny almost to think that after all those years it's only simple pleasures in life that count.
With age comes wisdom....surely I already knew that a long time ago.

the bee that is in peace

smooth insight inside you and your life, thank you Pascal Derrien

This is kind of my own particular and personal persuasion also - is there a pill I can take to reverse this natural inclination within me :-)

#28
Have no fear Deb\ud83d\udc1d Lange, Brand Ambassador @beBee Watch this space for the return of the sixtiers!

#29
thanks Devesh \ud83d\udc1d Bhatt I am a very simple guy at heart and I am not going to pretend otherwise I am a big fan of understanding stuff at the level of a 7 year old even though many of them are way smarter than I am :-)

#28
many thanks for reading Deb\ud83d\udc1d Lange, Brand Ambassador @beBee and sharing your thoughts I agree on all points, the rat race is overrated :-)

The simple pleasures of life are repeatedly invaded by commercial complexities. Simplicity needs to be rooted to withstand it all. You have it rooted in such an amazing way, it reflects in your writing. Even the other bizzes which appear abstract, carry simplicity. Very inspiring wisdom. Loved reading it. Thanks.

#24
thanks so much Cyndi wilkins but you are probably commenting about somebody else in different article aren't you? ;-)

#25
thanks Franci\ud83d\udc1dEugenia Hoffman, beBee Brand Ambassador smart don't know about that one ;-)

You're a smart man, Pascal Derrien. Keeping it simple with no great expectations make a good life.

The sweetest, most humble people I have ever known come from simplicity...No illusions...no masks...no tootin' their own horns...just pure authenticity and kindheartedness...I think that describes you beautifully Pascal Derrien ;-)

#22
Thanks Tausif Mundrawala just a simple guy with a simple recipe and simple needs.... :-) Wont win the nobel anytime soon :-)

#18
Keep it simple is my motto Savvy Raj :-) Many thanks for sharing your point of view !

#16
thanks Ian Weinberg I am part of the no thrills patrol we send pre-packed humility pills to whoever may need it :-)

So often Pascal Derrien you offer up a wholesome slice of life - the timeless authentic type. Beats all that sophisticated coaching in how to be something that they said we ought to be.

#14
Funny don't you think sometimes the answers to everything lies in simplicity and staying content. Today I read an article by the CIO of Google X on his search for happiness and about the death of his son during a routine appendectomy which is very sad. In his book, he says he had all the wealth needed but could not be happy and then says, he found a happiness formula. Did you meet with him and share the formula? :) He is on a mission now to deliver his happiness message a billion people and Pascal Derrien here gives us the formula quite easily. I wonder if they are the same

#11
With no play on words, your comment is music to my ears sometimes we don't know that we already know :-)

#10
cheers Ali comments like yours encourage the little apprentice scribbler to perfect his work :-)

#9
thanks Debasish Majumder the wise stuff is probably timeless :-)

Pascal Derrien You have unmasked the golden truth of life quite early and I admire you for that. Indeed having a roof over our head and food on the table is more than enough to go on with our lives. For we live only for a brief moment in our lives and living it contently with good music plays a big role :)

Reading your lovely buzzes such as this one is one example of little joys that count a lot.

this is an eye opening buzz for not only present generations but extremely relevant Pascal Derrien! enjoyed read and shared. thank you for the buzz.

#7
thanks Bill King sometimes I make sense and I even surprise myself :-)

#5
Indeed Julio Angel \ud83d\udc1dLopez Lopez complexity is way overrated its fine by me being a simple dumbo :-)

Health and hope, never get bored.😉

Excellent post Pascal Derrien, great sentiments which I agree with whole heartedly and finished with an upbeat rock n roll video. Can't beat it with a stick! :-)

Unlike you, Pascal, I am absolutely obsessed with work. I could watch other people doing it all day long. 😂