Psstt...Or The Ballad Of Billy & The Kid 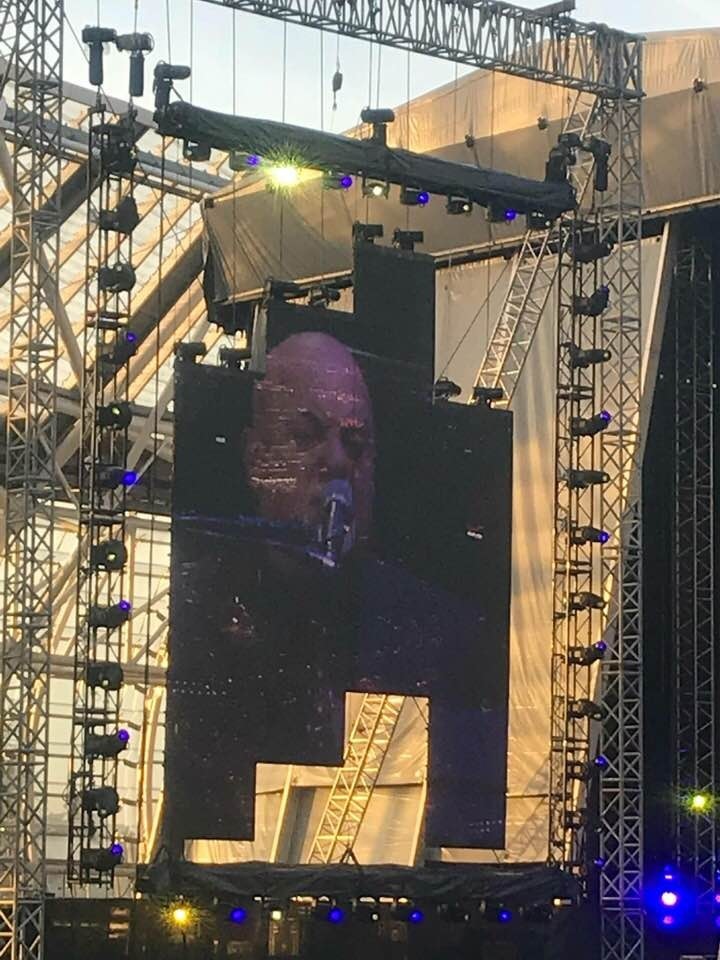 Billy Joel's first album with Columbia was Piano Man, released in 1973, I was four years old maybe or something like that. My first memory  of him though would come much later with the release of the massive hit ''Honesty'' that inundated the radio waves worldwide. I remember being completely hooked on the song every time the car radio was blasting the tune in the old Renault 4L that my dad was driving. I did not understand the lyrics at the time but I could already sense and perceive the emotional song writing ability that Joel would perfect later with other songs.

June 2018: Dublin 19.00. I am about to watch one of my favourite artist on stage. Only three European dates on this tour and Dublin is one of them. The last time I saw Billy Joel on stage was in Paris, I was probably no more than 20 years old. I remember clearly that my punk, hard rocking friends and other metal heads could not get over the fact that I was into ''mainstream'' music too.

They did not understand that Joel was more than just a piano man, to me he was and is one of the most brilliant lyricist I have come across. He is a paper tiger at large. The poignant power of '' Good Night Saigon'' or the exciting melody of ''A Matter of Trust'' always throw my spine into a shivering mode. Forty years on and its not up for debate, the prophetic element of his texts is still acutely and scarily relevant !!!

June 2018 : Dublin 22.45. What a show that was, what a voice he has and what an extraordinary back up band he is supported with !!! The show is over and myself and my other-half are directing ourselves thru the corridors towards the exit. At that point I mention to her that I need to make a trip to the gents.

As soon as I step into the male toilet area I know there is something eerily different. For starter it is really quiet compared to the noise level emanating from the stadium show goers outside the sheltered concrete box. I also realize relatively quickly that I am on my own but decides not to think about it any further than this being just a pure coincidence.

Head down I begin to wash my hands at the sink when I start to notice and hear a voice calling me by my first name.I bring my head up and he is there in the mirror..... looking at me with a happy and engaging smile.

How did you find the show ? Billy Joel asks me with no hesitation. euh ... brilliant I finally manage to answer, it is obvious I do not quite understand what is going on.

Don't be afraid man, you are not the first one who is surprised by my after show appearance in the male toilets and for the record I only do male toilets right he added jokingly. So tell me what did you like and what did you miss?

Well I suppose I really loved the fact that you played ''Pressure'' but I missed ''Good Night Saigon'' and few others.

Yeah fair point, I am trying to have a more poppy angle on this tour, did you like the fact that I proposed a choice between two songs on several occasions?

Oh yeah, Billy !! can I call you Billy? That was good and can I say that you have a cracking sense of humour too and gosh your musicians are brilliant !! says I unconvinced I am making a huge pile of sense in front of one my idols.

Can I ask you a question Billy? Sure fire away young man!!! Why don't you record anymore? The 64 million dollar question, I have probably answered that one a few times my friend. Basically I think I have said all I had to say man and adding another record at this stage would be more a commercial pursuit than artistry but who knows....

While I try to come up with a more sensible and less conventional question, Billy points out his finger towards the door indicating that somebody is probably about to enter in the room. In fact it turns out that there is actually not a soul in sight except me and Billy but when I turn back towards the mirror... I am alone... he is gone.

My other half is waiting outside and greets me with a ''what the heck were you doing in there, it took you ages'' comment. At that stage I think it is best to compose myself and avoid unnecessary questions about my sanity by pretending that it was actually pretty busy in the men rest rooms or was it?

#42
many thanks Franci\ud83d\udc1dEugenia Hoffman, beBee Brand Ambassador it was wowzing evening indeed 😀

Wowsa, Pascal Derrien! Billy Joel, a super talent and one of the all-time greats. Thank you for sharing.

#31
an artist with a capital A Gert Scholtz I agree ☝️

Pascal Derrien Great read Pascal with a twist toward the end. Also a Billy Joel fan - and I think it is often overlooked what a great piano player he was.

#24
many many thanks for sharing this Bill Stankiewicz, \ud83d\udc1d Brand Ambassador back in a day I managed a metal band when I was 17 we opened for Bay Area recording bands later at 21 I managed a pop rock outfit we produced a 4 track cd and almost got signed by Sony 😀

Thanks 🙏 Julio always wash your hands I was told 😉#26

You always have to wash your hands, who knows who you can meet? ;-))

Mirror, mirror on the wall, Who’s the best piano man of all?

#19
Rockers Rock! I remember when I was in college, I was a doorman for Harlows Bistros & Discotheque, Burbank Illinois where we had rock bands every weekend. I worked on Friday & Saturday after teaching Karate class in Chicago & my students would come to Harlows to see me. I was paid $30.00 cash, & given 6 free drink tickets, free sodas/juice /chips/pretzels. I never drank when I worked there & gave my tickets away to my students, I would have a group of 6-10 stay with me there. I was always polite & only on a few occasions would need to put a person in a head Locke & walk them outside when they were causing trouble grabbing the waitress or bar tenders. I saw some great bands like Cheap Trick, many folks from UK traveling bands & many others, I always used cotton in my ears because Music was Loud!! Drank coffee, juice & enjoyed the time there, got real good at spotting fake ID's. Hopefully this is not too boring of a Buzz. Makes me want to pull out my LP's of Jethro Tull, Cat Stephens. Jethro Tull's album "Heavy Horses" pretty cool. Regards, Bill Stankiewicz, a small rock & roll bee in Savannah :~))

#22
#22 Cyndi, that sounds like the start of another post here for all us bees!!! May be a best seller here for beBee.com, you may get definitely 1 million views !

#18
Right on Bill Stankiewicz, \ud83d\udc1d Brand Ambassador...I have a tattoo of a prism on my left shoulder...taken straight from the cover of Pink Floyd's 'Dark side of the Moon' album...Launched them to instant fame;-)

Definitely formed a soundtrack for my life too. Joel is brilliant.

#17
many thanks Bill Stankiewicz, \ud83d\udc1d Brand Ambassador and yes Cyndi is a rock chick alright :-)

#15
Ahhh...Those were the daze of purple haze;-) Many an extraordinary artist lost to it. But there was magic in the making....

What would life be without the dreams and fantasies Pascal Derrien? That parallel universe is the source of magic. Enjoy!

#11
Cyndi wilkins yes still called LPs in music circles now at least in the ones I am part of .... but they are as old as I am so don't quote me 😉

I'm sure you have some cosmic rationale for that interesting experience Pascal Derrien;-) My favorite Billy Joel album was 52nd Street...Do they still call them albums?!?! Lol! I think I just dated myself;-) I'll take that bottle of red now!

#7
I love the Parris Island anecdote :-) Neil Smith It was a great and unexpected evening :-)

#3
funny Aaron \ud83d\udc1d Skogen we missed Elton who played a few weeks earlier (and I was fine with that :-) ) but not a chance I would miss that dude and gosh I was right :-)

#2
Indeed Bill King but I completely lost my ability to react that said I don't look at toilet papers the same way since and I don't close the door behind me....actually sometimes only :-)

I first heard "An innocent man" in high school followed soon after by "Goodnight Saigon" which I thought was called Paris Island for several years afterwards. As with you, most of my friends' music tended toward AC/DC, Pink Floyd and SLF. Billy Joel was definitely a personal listening pleasure for a teenager in the Scottish Highlands. Sounds like a great gig.

#1
Led Zep in Seattle wowzer it sounds like a perfect story to be told :-) Many thanks for dropping by Randall Burns

Great post Pascal Derrien Can't beat a good concert. I've been to many but you've inspired me to write about a particular concert, one of many, I saw in 1977, Led Zeppelin in Seattle. Hmmm...