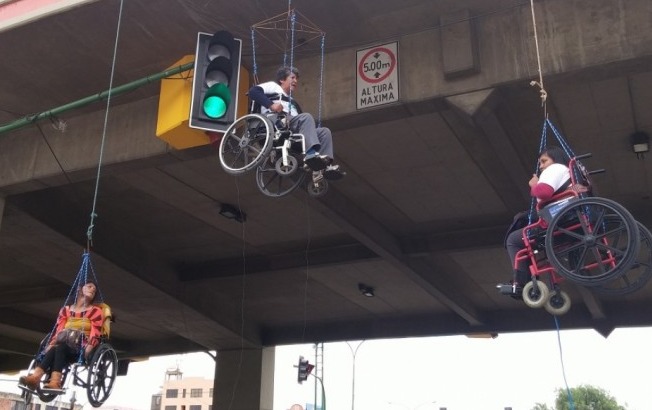 A damning report from the World Health Organization (WHO) ‘’shows more than 1 billion people with disabilities face substantial barriers in their daily lives’’. Two things spring to mind when hearing this: first I am shocked to find out that this was the first comprehensive and global report on disabilities in 40 years!!! Second is the number quoted: ONE billion, I repeat ONE billion.

How much is one BILLION? Apparently the British say it’s one thousand million, anyway it does not really matter especially for somebody like me who cannot count any further than 3, but what I know now is that besides nine zeroes after the one (1,000,000,000), that’s a lot of people and since people are not statistics that’s a lot of stories too...

I meet James at a school cross country race in 2015, my son was running that day and I came to support him. I shook hand with James when he crossed the finish line after a 100 metres sprint, he had a big smile on his face when I congratulated him on his race finish.

The same year James was awarded the prestigious Sport Person of The Year Award in his age category at his local school.

James Casserly that’s his name is a wonderful ten year old boy. He was diagnosed with Cerebral Palsy when he was two which affects his core and lower limbs mostly. In turn this leads him to have difficulty with independent walking and balance. But James is a fighter and likes a challenge, he came up with an idea of running a race, which for some reasons escalated to the SSE Airtricity Dublin Marathon which is 26.2miles !!!.

When asked what charity James would like to do it for, without a thought he declared Barretstown an Irish Charity who gives kids respite and fun. Availing of their services himself James know how really special it is to all children and he would like others to share the smiles and fun of his time spent there.

Not one to miss an opportunity, James set an ambitious goal for fund raising but more than the money James is set to become the youngest person to ever complete the Dublin marathon in a wheelchair

As often when you challenge the status quo you come across nay sayers, detractors and other disbelievers, but you know what? James is well able for them.

Who is trip trapping under my bridge, that’s probably the reflection some Bolivian officials had when they realized a bunch of disabled activists had suspended themselves for several hours @ Viaduct Bridge on Highway White Galindo Cochabamba.

This was not only a spectacular but impressive way to pressure the Government no doubt about that but hang on it did not stop there. Adding to the prowess and striking dare they further announced and confirmed a caravan wheelchair bound for the city of La Paz.

500 hundred Bolivianos bonus per month that’s what they were asking for, not surprising when the WHO reckons ‘’In low-income countries people with disabilities are 50% more likely to experience catastrophic health expenditure than non-disabled people’’

You See Me No You Don’t

Beno Zephine is her name and she is Indian, I read recently that Beno had become the first Indian Foreign Service (IFS) officer with 100% visual disability. She is a wicked lady who is not ready to settle for pre-conceived ideas, for example she apparently ‘’tried to get rid of the dependence on Braille books by switching to Job Access With Speech (JAWS).’’

Did you know that there is about 285 million people affected by vision deficiency or considered as visually impaired? This what I learned when I spoke with my friend Sinead Kane the Irish Elite Blind Runner. On the day of that conversation Sinead was also very quick to remind me ‘’ I can choose to be blind or I can choose to believe anything is possible’’

Welcoming the report, renowned theoretical physicist Professor Stephen Hawking said, "We have a moral duty to remove the barriers to participation for people with disabilities, and to invest sufficient funding and expertise to unlock their vast potential… It is my hope this century will mark a turning point for inclusion of people with disabilities in the lives of their societies."

You are bound to know somebody with disability, someone the other day told me that any of us are one accident away from disability. That’s true but we should not be playing on fears, how about we start the conversation by replacing the notion of invisibility with

#25
will check out thanks for the pointer John :-)

Go James! That is quite a challenge.

#21
I am running a marathon for that kid Lisa Gallagher :-)

#16
Ken Boddie, I'm glad you posed that question, I never saw the link before!

#19
I think we are al guilty of this every now and again it does not mean we don't care Aurorasa Sima :-)

#15
What's that link again, Pascal? I'm sure there are others who may have missed your original post and would like to donate to am excellent cause. 😀

I'm glad you told us a little more about James, Pascal. How's the fund raising going?

Great topic Pascal Derrien, I love how you ended this by asking to replace the term invisibility with invincibility. Sadly, a sector of society continues to turn a blind eye (no pun intended) towards those who have disabilities. I'm sure we all know someone who has one and is in dire need of help. It can take a long time to finally receive benefits and many are declined even though they have legitimate disabilities and must re-apply. The funds are slim, so people who do live on disability alone are living below poverty level. We have a long way to go as a society. Kudos to James, he's embracing his disability. I saw a few in wheelchairs during Ironman races too, it brought tears to my eyes- tears of joy that they did it. They put me to shame ;-)

#8
Thanks David Grinberg I did not know that and thanks for the additional I will check them out with interest Much appreciated :-)

#9
thanks Donna-Luisa Eversley disabled people are awesome and inspirational beyond limits they have to be super humans to get by on a daily basis, they climb mountains everyday....

Thanks for an awesome read Pascal Derrien. In the USA, October marks the annual observance of National Disability Employment Awareness Month (NDEAM) which is coordinated by the Office of Disability Employment (ODEP) with the federal Department of Labor. I also spread some sweet honey about this back in July to commemorate the anniversary of the landmark Americans with Disabilities Act (ADA) . Check out these links and thanks for bringing this important issue to our attention. https://www.bebee.com/producer/@dbgrinberg/why-disability-employment-good-business AND https://www.dol.gov/odep/topics/ndeam/ AND https://www.whitehouse.gov/the-press-office/2016/09/30/presidential-proclamation-national-disability-employment-awareness-month cc: Lisa Gallagher

#6
Indeed had a parallel discussion on how design is not conducted with disability in mind and very often not part of the book of work let alone RFQ thanks for commenting Harvey Lloyd :-)

Great read, thanks for posting. It is a subject that we deal with here everyday. Although physical barriers do exist. I would say the emotional barriers are the toughest. Ren\u00e9e Cormier touched on this in her commentary. The cycle of frustration is the most damming. Businesses do some accommodations but not enough while those who need them are frustrated because the accommodations are not enough for them to thrive. This cycle repeats until apathy reigns on both sides. I feel for the parents who suffer the system with a child who requires special services. In some cases its like a black hole that air comes at a price. Mostly your sanity.

Many thanks Ren\u00e9e Cormier#3 for adding some essential points to the conversation your points are very valid and true......