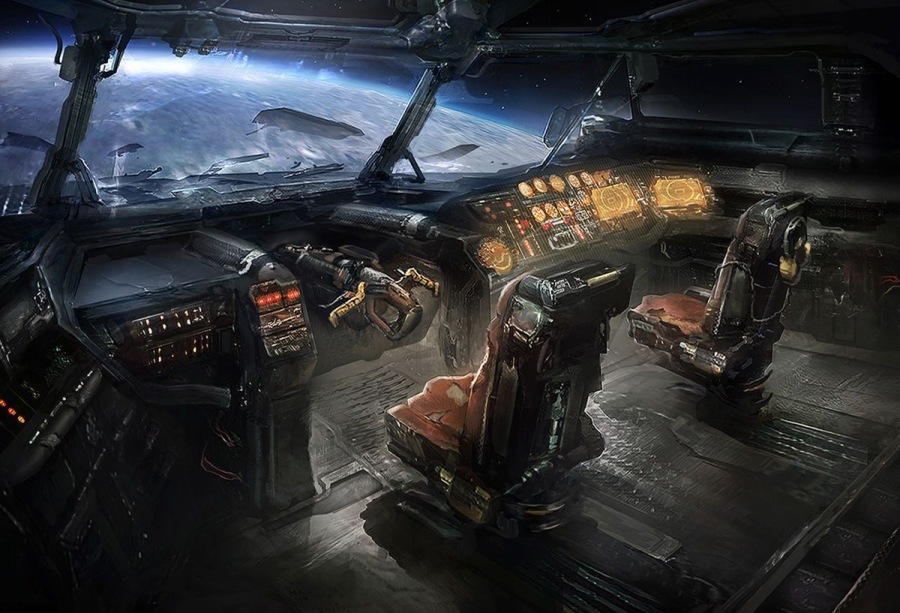 Chris: hey Matt would you come here a minute, Josh has something interesting on his screen.

Chris and Matt are the highest ranked flying officers on HCK C241 while Josh is the navigation expert, there are 9 crew members on board including the three of them. They have been patrolling the area for what seems to be a lifetime now. The three men get somewhat excited and anxious partly because they have not encountered any other ships for a while in this turbulent part of the Xyrax Galaxy.

Matt: Who are they Josh, what is our database saying ?

Chris: Josh can you tell us who those guys are ? We better get a head start and understand whether we should be wary of what we may find out.

Josh: I am on it and I have something guys but this is not really making sense so hang on a minute while I double check the data

What they see is the Helius Support Squadron Chrysalid (HSS) but the data are not conclusive when it comes to identification and ''port d'attache'' registration.

Matt: An HSS, really ? I thought this acronym was no longer in use in spatial navigation for a long time now.

Chris: Technically speaking the term has been retired more than 90 years ago man so whoever is piloting this....

Josh: Maybe it's a Haunted Space Ship !! Jokingly interrupted the navigation officer failing to release the tension of the conversation

It does not make the two officers smile but they agree it is odd alright and therefore decide to send a search party over to the mysterious ship. Most attempts to communicate with the flying object have failed so the most probable option to establish contact is  to get in there. The reconnaissance squad will comprise four guys : Matt, trooper Mc Yntire and Yako plus Dr Ixum bringing his scientific expertise. It is agreed that Chris will coordinate the whole operation from the flight deck.

Chris: Are you guys in there alright over ?

Matt: Copy that man, we are past the main gateway and soon we should reach the command center. Yako is checking oxygen levels for now

Yako: Hey Matt. Oxygen levels are normal interestingly enough they seem to have been refreshed a few hours ago only.

Dr Ixum: OK guys you can take your helmets off according to what I can read. Yako will go first.

Chris is nervous and uncomfortable especially when the search party confirm that the flying deck  is empty. However it soon become a different story altogether when Mc Yntire who has been wandering on the upper levels break the news that he has discovered three bodies in flying gear. They are all intact but facing the floor down.

Chris: Will you guy scheck for possible contamination before you make any attempt to find who those poor souls are?

Dr Ixum: Contamination protocol complete guys. Its clear and we are good to go for further proceedings.

Matt: Cool, Yako will you reverse the body position with the face up for me please.

Yako: Sure thing just give me a second Matt.

Yako does what he was asked to, he slowly and meticulously alters the cadaver position in order to be able to make a formal identification. However as soon as his eyes meet the face of the corpse he steps back almost immediately from the dead body with a look of suffocating surprise.

Matt: What's up man, will you calm the fuck down !! it can't be that bad ! Its not the first time you see a dead body !!

Yako: You better check that one !!!

Chris: Hey guys what's up in there I can see you but you are not saying anything can you report back?

The following minutes bring chaos, incredulity and frankly way more questions than answers. They have not even checked the two others lying bodies providing the difficulty they had to come to terms with the enormity of what they have just found.

Matt: Chris I hope you are seated because the name tag on the uniform is yours....

Chris: What? You are fucking sure ? only managed to moan the officer.

Dr Ixum: Matt is right but let me run a DNA check first to see what we are dealing with?

Yako: Should we check the others?

Matt: No, not for now Yako let see what Dr Ixum is coming up with on this one

Dr Ixum confirms the DNA match Chris's molecules and this molecule for molecule. So are the genetic information results on the two other bodies belonging to Jack Y and Orgo respectively serving as Chief Mechanic and Spatial Researcher on HCK C241 both men reporting to Chris from a chain of command standpoint.

Chris: Are you guys dam sure of what you are saying?

Matt: Positive Chris, Dr Ixum ran the test three times, I know it may sound crazy but according to the remains and bone scan the body we have in front of us is you.

Chris: I cannot believe whatever fucked up story this is man.

Dr Ixum: I know it may sound crazy but right now I am not in a position to identify the time or year of death you see?

Yako: I don't get it doc what are you saying in simple terms?

Dr Ixum: Well it is simple and complex at the same time Yako but lets say for argument's sake that forensically speaking I am incapable to confirm whether these bodies belong to the past or the future....

Pascal Derrien A sci-Fi writer lurking beneath all of the other posts you publish...cool piece , thank you

#29
ah thanks Franci\ud83d\udc1dEugenia Hoffman, beBee Brand Ambassador if it is somewhat entertaining and not too boring four minutes I cannot ask for more many thanks for reading and for the High5s :-)

All I can say is Wow! You've got some imagination, Pascal. High fives, fist bumps and bravo!

#25
Many thanks for the compliment Ian Weinberg I have always suspected you knew more than you dare sharing with us, all this insight and wisdom makes sense now :-)

#25
ah Neil Smith you are the first to ask me for a sequel not necessarily for this one by the way I don't know but I promise I will think about it :-) Now I also think its great if people come up with their own scenario :-)

And to think that you thought I was a fellow Bee living in your lifetime Pascal Derrien 😂😂 I transcended the physical 200 years ago. I’m sitting here in Singularity blowing smoke rings with your great-great-great-great grandson and watching you Bees floundering around as you create Trumps and Brexits and stuff. We’re not allowed to tell you what happens next ... except that you’ll need to grow your own peas in your backyards. A riveting and inspiring tale Pascal. Keep on going - there’s a place for you in the Singularity.

Enough of the plaudits. When are you publishing the following episodes? Don't dare think you're getting me hooked and then leaving this story unresolved. Was the title inspired by the John Wyndham story?

#20
when you think I actually have never seen Star Wars :-) Praveen Raj Gullepalli

#11
#12 Hey Praveen Raj Gullepalli) is maintaining secrecy out of respect for your feelings. Being more blunt and considerably less tactful than the commander, I feel duty bound to point out that your assumption about Obi-Wan Kenobi is close but out by a couple of centuries on the galactic time count. Obi-Wan was indeed a distant relative, having fought side by side with my great grandfather in the Great Inter-Galactic War of the first epoch. Hence, I eventually inherited the Formal Force name of Obi-Wanabee from my father, Obi-beBee, who, although an ardent theoretical pacifist, was a passionate guardian of the hives. So passionate was he in maintaining the freedom of honey for all, that he was individually responsible for the disappearance of over two hundred trolls, by paying them compliments and telling them dad jokes. May the humour be with you!

Pascal Derrien Pal this is fantastic. Love it 😊It seems that we are living in a time and age where the reality seems untrue and it’s happenings make me wonder am I where I am supposed to be. 🤔🤔🤔🤔🤔

Pascal, Wonderful! Meanwhile back in the Quantum Physics research lab...

Very good Pascal Derrien . The future is an uncertain past? Perhaps.

#3
ah many thanks Debasish Majumder support is much appreciated :-)

#1
ah Big K you are talking to me ,you actually exist and I finally found you after all those years of trying to get access to your wisdom. Today is a great day.... Yeah I have always been suspicious of Ixum by the way cc Ken Boddie :-)

Thank you for bringing this fleetship log to my attention, Commander Derrien, but even a cursory Doodle search of the Intergalactic Web would have revealed that, back in 2519, this HSS ship and crew were completely and convincingly fabricated as part of that madman Hessinger’s illegal cloning operation, then locked in a time warp by the Federal Galactic Bureau. This is the same time warp that was breached two epics ago when the Zeods attacked Empire Base Aloha. I’ve told you before that hothead Ixum is an unreliable diagnostician of parabolic events and is all too quick to jump to conclusions without referencing the now widely available metabolic historical timeline data. Have him scheduled for retraining on your return to Empire Base Sigma. Meanwhile I commend you on the descriptive accuracy of your report and for having it relayed directly to my attention via secure gamma-mail.